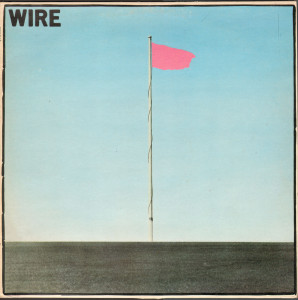 Wire weren’t particularly proficient on their instruments but they thought their way around that obstacle. Pink Flag is a triumph of intellect. It’s an album of rare inspiration. Art schoolers who take up music often find a way to make it interesting. Necessity is the operative word here. Wire was driven by what they needed to do and they didn’t bother with anything else. If they went out of their way to do anything it was to make a largely uncharacterizable rock album.  This music is about texture. Two or three chords can make it happen. Rhythm is the principal gear that keeps the machine grinding forward — through poverty, scandal, hate, sex, and divinity with a careful posture.   Pink Flag has no middle ground. It is primal throughout but still smartly profound. This happens without references to politics, common for Wire’s peers. The angular guitar slashes cross Colin Newman’s sly cackle. This is a bold album. It’s funny and silly too. The group knew they were in it together. The concept didn’t require any individual show of force; there aren’t solos.   These crafty songs don’t have to be long. Some are short as to be more interludes. This advances only the group’s essential notions. “Strange” has an ominous low-end rumble fueling rebellion. “Ex Lion Tamer” has mocking social eyes. Then “Three Girl Rhumba” and “Champs” are diametrically opposed as far as use of space. “Reuters” challenges what passes for everyday events and perhaps who profits off the system. “Start to Move” and “1 2 X U” alternately plead and observe. Though minimalism is a common thread, each song is unique. Within Pink Flag, Wire constantly rethink their approach. This keeps the album more enduring than obvious. The pace never halts. Pink Flag does subtly dance some modern steps, keeping every movement precisely trained on a desired result. Their repertoire is deceptively diverse. Each song tells nothing of what the next holds.   Popular music traditions aren’t abandoned so much as they simply aren’t needed. Wire use knowledge of visual arts instead. They don’t feel obligated to play songs in any familiar way. “Lowdown” and “1 2 X U” are degenerate deconstructions of rock music. Newman crams the lyrics into any form, deleting intelligibility (the way Television used a photocopy of a Robert Mapplethorpe photo for the Marquee Moon cover). This places extreme force behind everything on the record. Wire coax you out of your illusions then halt. There is no ignoring this unexpected music. Pink Flag is an essential. This music is a welcomed alternative to the prodigal pop music wasteland. Wire got it right by (musically) screwing everything up.