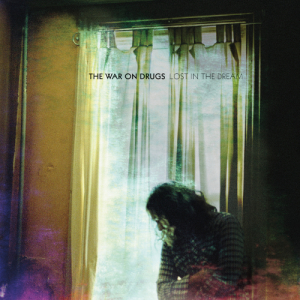 Add Lost in the Dream to the growing roster of indie rock bands of the 2010s aping the sounds of late 1970s/early 80s FM radio pop, like Don Henley, Paul Simon, and Jackson Browne.  This is self-consciously nostalgic, “retro” music.

Many of these songs go on longer than it seems they should.  They just vamp over and over again.  If we pick up the Paul Simon angle, it is almost like the scene in The Graduate (1967) — a film famously featuring a Simon & Garfunkel soundtrack — when the main character floats around in a pool all day and when asked what he is doing simply replies, “Well, I would say that I’m just drifting.”  That is what many of these songs do.  They drift.  They have little to say, and that little content is mostly just repeated to make up a song.  There are more interesting bits, like when some horns appear at a transition to a slow resolution about three minutes from the end of the opener “Under the Pressure.”  But these more interesting bits are just brief moments in songs that otherwise seem so uniform as to hardly change from beginning to end.  They melt away into an almost indistinguishable washover of reverb.

It is almost always tiresome when an artist slavishly recreates old forms.  To be interesting, they must go beyond the historical reference point.  They must be more faithful to some ideal than the idol they “imitate”.  So, we can ask, is this more boring that Don Henley?  A question like this is not one everyone would choose to ask.  But it is the necessary question.  The answer has to be “yes.”

If there is a value to music like this, it is that it gives expression to an inability to articulate powerlessness.  The near impossibility of affirmatively “proving a negative” is the challenge it takes up.  Framing the issue this way may be self-defeating, in a larger sense, but it is the chosen framing for Lost in the Dream.  Take a look at the world today.  Capitalism is collapsing.  The prospects for a transition to socialism are still in question.  But a reversion to some sort of new fedualism is showing signs everywhere, with the populations of most industrialized countries reduced passive observers.  Music like Lost in the Dream is tailor made for the sorts of college-educated people who always saw themselves as having (or deserving) more freedom and power than they actually sense they have today.  The music stops well short of putting these things across.  It stops with emotionally portraying the gap.  But this is important.  Boredom is a starting point.  “If you are not bored, you just stupidly enjoy the situation in which you are.”