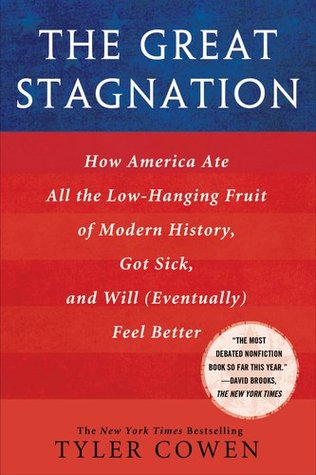 Tyler Cowen – The Great Stagnation: How America Ate All the Low-Hanging Fruit of Modern History, Got Sick, and Will (Eventually) Feel Better (Dutton Adult 2011)

Terrible. That’s about all I can say. Cowen is often described as “apolitical” because he doesn’t explicitly endorses Republican or Democratic policies, but that misses the point entirely. His view — more or less shared by all Republicans and Democrats — is that neoliberal growth-focus is basically “correct” but he breaks bipartisan rank to say that proponents of neoliberalism have made some tactical errors. Anyway, this slim volume is plagued by shoddy research and continual logical flaws. I came to this initially because Cowen discusses patent activity being greatest in the early 20th Century, and I wanted to investigate his research. It would be overly generous to credit Cowen with any “research” in this area, however. He essentially did none. His support was a single (!) article by a person seemingly unfamiliar with patents, who did a cursory electronic search of patent office records that would have taken no more than a few minutes and drew wildly unsupported conclusions (the basic premise of the cited article has been refuted by Robert Post’s “‘Liberalizers’ vs. ‘Scientific Men'” article, among others). And the rest of this book proceeds in a similar fashion. Much like Morris Berman‘s books, he’s clearly backfilling flimsy citations for ideas he’s already formulated and has no intention of rigorously testing — like pawning off the research to an assistant who doesn’t understand the arguments and whose research is correspondingly poor. As to the logical flaws, Cowen’s main thesis seems to be Marx‘s idea that profits tend to decline over time, but Cowen resists that theory…for indiscernible reasons — it isn’t even brought up explicitly. So, we’re back to him being a neoliberal apologist with no interesting arguments whatsoever to counter alternative theories. A great big “pass” on this book.