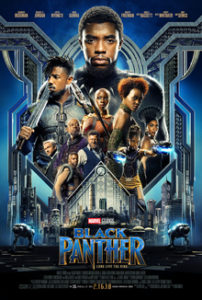 This film is repugnant.  That is perhaps not too surprising for a contemporary superhero movie.  But Black Panther dons a particularly reprehensible mantle when it makes the “bad guy” (Erik “Killmonger” Stevens) someone pursuing basically Frantz Fanon‘s program — which inspired the real-life Black Panther Party for Self Defense, which in turn inspired the “Black Panther” comics — and makes the “good guys” a bunch of aristocrats (led by T’Challa) who resemble Aleksandr Solzhenitsyn.  What is the significance of these parallels?  Well, Fanon was an anti-capitalist while Solzhenitsyn was a shameless opportunist who ingratiated himself with rabid anti-communists to promote a restoration of tsarist autocracy.  What is the plot of Black Panther?  [spoilers] A reactionary, isolationist autocracy in the land of Wakanda is displaced by a (rightful) challenger who seeks to use Wakanda’s accumulated wealth in a quasi-communist way to benefit the oppressed around the world, but then a palace coup occurs in order to violently restore the autocracy (led by basically a Donald Trump-like neo-Bonapartist figure), prevent a radical equitable distribution of wealth and maintain a slightly modified, reformist strain of selfish, isolationist hoarding — now with a few inconsequential, token welfare programs still totally in line with the global status quo of massive inequality.  So, the best way to view this film is as a tragedy revolving around an unreliable protagonist.  The “bad guy” is really the good guy, and he loses.