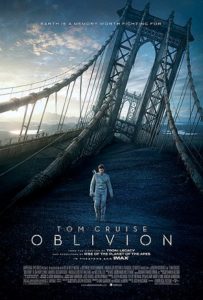 The story is really just an amalgamation of plot points from other films: Moon, Total Recall, Independence Day, 2001: A Space Odyssey, Beneath the Planet of the Apes, Inception, The Matrix, etc.  But the special effects and technical realization of this movie really outshines all those others.  While the plot may not be ingeniously new, it blends known elements together in a way that is cohesive and effective.  Once the viewer accepts the basic conceits of the science fiction setting, every scene is staged plausibly — there are no scenes that prompt guffaws due to trivial yet implausible details.  At the risk of spoiling a plot twist, the film also takes a surprising matter-of-fact view toward cloning and the social interchangeability of clones.  Reviews of the film were poor.  No surprise, really.  This sort of film, though coming from Hollywood, chafes against what Hollywood prizes.  In other words, it is a better film than Hollywood normally permits, and the plot — derivative or not — has a kind of anti-corporate message that is always officially frowned upon even as Hollywood keeps inserting such messages into various films.  There is also some serious, if under-/unstated, questioning of how contrived and fake certain emotions and social institutions can be.  Tom Cruise is the perfect lead, able to convincingly deliver a role that requires a “useful idiot.”  The rest of roles are well cast too.