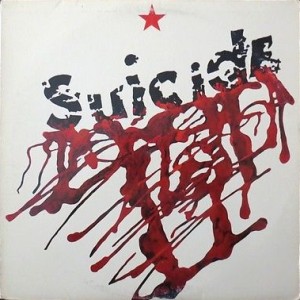 Displaying a very technical glee, inanimate synthesizers churn out their obvious products while hands and mouths force the onslaught. Suicide could provoke almost any audience to drop all the piss they sloshed in with. A Suicide show likely and intentionally would cause a riot (one documented on the flexidisc 23 Minutes Over Brussels). Hearing them live used involve real mortal danger. Lester Bangs once quoted Alan Vega shouting back at the audience, “What’re you all fuckin’ booin’ for? You’re all gonna die.” The grand mess this suggests wasn’t one Suicide created but one they were cleaning up. Like the poet Arthur Rimbaud suggested, Suicide used pain to become voyants.

This was Suicide’s first album (as opposed to their second album of the same title), recorded in three hours plus mixing time. They had already been performing occasionally over the years in New York. Around ’77 they were fixtures at Max’s Kansas City and the Mercer Arts Center, with some appearances at the “highbrow” CBGB’s. Their influence reached countless bands. Knockoffs may have been more popular, but Suicide was always by far the best.

This minimalist approach can evoke a rockabilly snarl in a pristine conceptual stasis with each outbust from Vega. Every delicate melodic statement has a force its own. The power becomes obvious early with “Ghost Rider” and “Rocket USA.” The songs put Rev and Vega’s elegant violence provocatively up front. “Cheree” and “Girl” have Vega’s moaning tuned to a frequency probably outlawed in most states.

Rev and Vega were linked to the streets. That put them on the level of New Yorkers like Thelonious Monk. While committed entirely to sophisticated pursuits, the proximity of the hunger and cold kept their music visceral.

“Frankie Teardrop” was the duo’s signature tune. A song more frightening than a dry read of Hubert Selby, Jr. This contrasts with distracting sideshow tactics. Suicide weren’t con men since they did not lie. They held an essence. Attuning ears to that essence beautifully reveals the solid values driving them. The clarity of their music was necessary to keep it true. Intricacy remained, undiluted.

Suicide anticipate a primitive future more glorious the convoluted one still known today. They make sure “punk” is always associated with confrontation. Suicide clears enough space to remember the forgotten innate beauties relegated to rediscovery among fetid piles of documents, glass, and flesh. Suicide seemed to enter a trance state to convey this from their end. A little bloodshed on the other end is inevitable. They teach fearless listening. It is incalculably more dangerous not to listen.

Suicide is as freaky as it has to be. It is also very cool and surprisingly easy to like. Apparently venom never spoils.