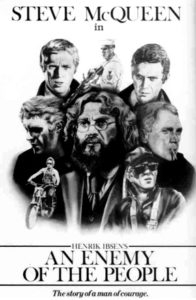 Action star Steve McQueen plays the lead in this  film adaptation of a Henrik Ibsen play about a whistleblower.  There are a few such films around, like The Life of Emile Zola (1937) with Paul Muni.  McQueen portrays a doctor in a small Scandinavian town that is planning to open a hot springs to boost tourism — they practically salivate over their ambitions to be richer and more cosmopolitan than other towns nearby.  When the doctor sends water samples to a distant university, however, the tests show that the water from the springs has been polluted by a nearby leather tanning factory.  He seeks to make this publicly known.  At this point the townspeople turn against him.  The viscous actions of the townspeople might seem extreme — they stage a biased, sham “town hall” meeting in which they deny him the opportunity to speak and then vote him “an enemy of the people”  — if it were not for copious real-life examples that have played out similarly (or worse).  The closest comparison for an individual might be those involving lead poisoning, like the scientist Clair Patterson who was vilified for trying to remove ban lead as an additive for automotive fuel, or, perhaps even the way the lead pipe industry, the tobacco industry, and so many others have acted throughout history.  McQueen is quite good, actually.  Complete with long beard that makes him almost unrecognizable, he plays the lead a bit like a Nineteenth Century hippie (or the equivalent for small town Scandinavia).  The cast playing his immediate family is excellent in their pleading and perilous sympathy, save for Charles Durning, who is miscast as McQueen’s brother, the self-important mayor and chairman of the corporation opening the shot springs — he wasn’t the first choice, brought in as a last-minute replacement for Nicol Williamson.  It is sort of appropriate that this film was scarcely shown upon release.  It may have come along shortly after Watergate, The Pentagon Papers, and some other famous acts of whistleblowing, but vested interests despise whistleblowers.  Just look at the attempts to suppress publications like Hau Hoo’s 現代相似禪評論 [A Critique of Current Pseudo-Zen] (1916) and A.S. Mercer‘s The Banditti of the Plains (1894) — the later having only a few surviving copies at one point, some of which were riddled with bullet holes (!) that testified to the attempts to suppress its availability.  An Enemy of the People isn’t wholly successful.  It has a claustrophobic quality like many film adaptations of stage plays.  But the story is compelling and many of the performances first-rate (Robin Pearson Rose is excellent as the eldest daughter choosing conviction over personal ambition).