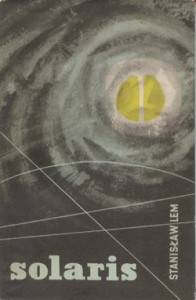 A work of science fiction, yes, but Solaris is also as much about humanity as anything else.  Psychologist Kris Kelvin travels to a space station on the planet Solaris, where strange things have been happening.  The thoughts of the cosmonauts are made corporeal, as “visitors”, by the planet itself.  A kind of pink slime “ocean” covers the planet.  It is sentient.  The ocean is even able to adjust the planet’s orbit between two suns.  A fascinating (and horrifyingly realistic) subplot is the way that Kelvin uncovers a conscious/unconscious plot by scientists to suppress the nature of the planet in published reports, relegating certain information to an Apocrypha and discrediting those whose findings contradict official dogma, with scientists acting like the guardians of religious institutions rather than seekers of knowledge as they profess to be.  The scientists are only able to apply language that is internally consistent, like mathematics, but never explains the mystery of the planet itself.  The planet remains an impenetrable other, its motivations inscrutable and unknown to the scientists.  Is it experimenting on the scientists?  Is it trying to help them?  No one knows. Comparing the novel to Moby Dick, Lem said that he “only wanted to create a vision of a human encounter with something that certainly exists, in a mighty manner perhaps, but cannot be reduced to human concepts, ideas or images.”  But what dominates the story about scientists who cannot hope to understand the planet Solaris, is that they also fail to understand themselves.  Everything they experience about the planet is filtered through their own, flawed consciousnesses first.  The premise of the book maps directly onto the work of Jacques Lacan, Alain Badiou, and continental philosophy — Lem called the Freudian interpretation “obvious”.   Certainly, one of the greatest of 20th Century Sci-Fi novels.