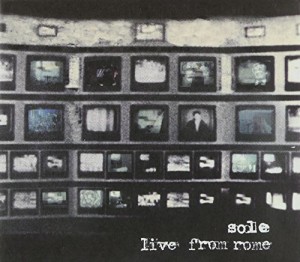 This is a much more overtly political album than Sole’s previous — and probably best — album Selling Live Water.  It isn’t nearly as successful.  Though there are good intentions everywhere on this disc, the music/beats aren’t always compelling.  I saw Sole live touring on this album, and he had a live band with him.  Frankly, many of the songs sounded better with the live band (the title “Live From Rome” alludes to the fall of the Roman Empire as a parallel to or hope for the fall of the American Empire; this is not a live recording).  The thundering “Dumb This Down” is probably the best here, but “Cheap Entertainment” is sort of subtly infectious.  Almost everything here is decent, but newcomers should start elsewhere. 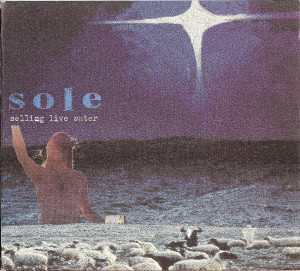 Selling Live Water is hip-hop that can’t take for granted that it is hip-hop at all.  It is music made to engage an audience and provoke critical thought.  Hip-hop is just a convenient form that it adopts.  Sole pursues his music with a fervor that concedes nothing but complete, honest commitment to his agenda.  The most appealing part of this is the self-reflexive aspect. Hip-hop has been around long enough now that a more complex look at the genre itself is due. Sole contorts traditions with no hesitation.

On “Da Baddest Poet,” Sole admits how he isn’t smart enough for any techniques other than hip-hop. The necessity of his place amidst hip-hop culture means he really is making some sort of contribution to it. Sole is just trying to keep hip-hop as good as it was, and promised to be, in the age of “conscious hip-hop”, just… different. He says, “in the immortal words of Ice-T/ shoulda killed me last year/ but in the mere mortal words of me . . . ”  There is humility here that is quite the opposite of the materialistic, misogynistic, violent subject matter promoted most heavily in the genre, combined with an awareness that Sole is tilting toward something else.

“Shoot the Messenger” goes off with “I never learned to kill for oil/ but then again I never learned to sit still/ and probably never will.” “Respect pt. 3” even seems to be a little anarchistic.  There are politics all over this album — not in the sense of passing news, but in the sense of a commitment to bottom-up social transformation away from corruption and domination (Sole has noted that material on the album was inspired by Howard Zinn‘s A People’s History of the United States).

Sole is a good lyricist though he has only a passable delivery, something still impressive given what Sole does. His lyrics are very busy, giving him the difficult task of fitting it all in. He is either silent or in vocal bombardment mode. What turns out to make it work is the jokey attitude — full of gags and purposeful contradictions. By some manner of calculation he is aware of precisely how much ferocity separates his mind and his voice. Even though his rhythms don’t stretch and his dynamics are flat, deadly words still ooze from each of Selling Live Water’s cuts.  Nonetheless, he steps up for some more impressive vocal rhythms, shifts and drawls on “Salt on Everything.”

The anticon collective producers on board (Alias, Odd Nosdam, Telephone Jim Jesus) cultivate a sort of blurred, hazy melange of oversaturated sounds, while keeping to a sense of syncopated rhythm.  The beats contribute to the bleary feeling of being overwhelmed by media and the numbing spectacle of mass culture.  This complements Sole’s way of rapping that often seems like shouting out as many words as possible without planning his delivery beforehand.

Sole makes good on the idea of personal hip-hop. He may not have expansive vocal talents to rely on, but he has still made some great music here.  To appreciate Selling Live Water, a listener must accept that important statements can be made without access to large resources or authorization by the powerful, without being a supplicant or sycophant, by anybody who puts in the effort.  If you reject those premises, then realize that this is an album made against what you believe.

Link to an interview with Sole by Brendan McQuade:

“‘Artists are Part of the Working Class’: An Interview with Sole”