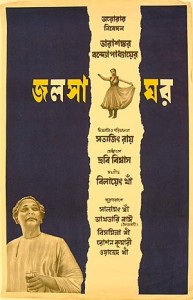 Satyajit Ray was a director who mostly followed the lead of cinema in other countries.  The Music Room is basically an Indian re-make of Sunset Boulevard (1950).  It is the story of a Raj (Chhabi Biswas) who admires music, but whose royal estate has dwindled due to some sort of flooding (the explanation in the film is cursory and implausible).  He is nearly broke.  A nouveau riche moneylender (Gangapada Basu) arrives and as a matter of pride the Raj spends the small remainder of his funds on a concert held in his palace music room, to show up the businessman and assert his hereditary superiority.  The culmination of the film is a lengthy music and dance performance.  But the best individual moment is perhaps when a servant is shaking incense or something at the concert guests, and when the businessman recoils the servant makes a point to shake some more of it at him.  The film suffers from having no likable characters.  The aging Raj seems like a fool, and the sniveling businessman is insufferable.  The servants and musicians offer no significant independent perspective in the film.  Most significantly, though, the film’s exploration of social class is considerably less daring when set in a caste-based society than when Sunset Boulevard explored class conflict and social prestige in a society that denies the existence of class.  The Music Room takes much too much for granted in casting archetypes: the Raj, the moneylender.  As a study in the vices of pride and hubris, this doesn’t offer much in the way of depth.  But the big musical number has its own value independent of the film.