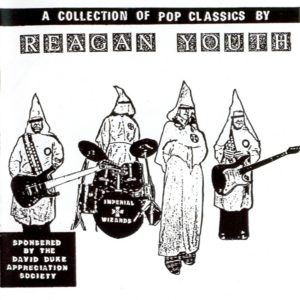 Reagan Youth formed in the early 1980s as part of the hardcore punk scene in New York.  They were named “Reagan Youth” to criticize President Ronald Reagan (then just a candidate) by associating him with the Nazi Party organization the Hitler Youth.  The band satirically appeared in concert in KKK hoods — bear in mind that they also played “Rock Against Racism” concerts and were staunchly anti-racist.  The imagery was invoked for the purpose of critique.  Their first album was an EP entitled Youth Anthems for the New Order, originally on R Radical Records (founded by MDC).  That EP was later released in expanded form as Vol. 1 (AKA Come Now Jim, It Could Never Happen Here) — the added songs “No Class” and “In Dog We Trust” are better than most on the original EP.  All of the original songs are classic hardcore.  In 1990 they released a second album, Volume Two (AKA For God….and Country).  Both of the albums are collected on A Collection of Pop Classics (and also Punk Rock New York, minus “Degenerate” for some reason).

The band’s first album is a nice slab of satirical DIY hardcore, in the vein of early Black Flag (Jealous Again).  What really makes it nice is the songwriting.  I sing the line ” ‘scuse me I’m not a category” from “No Class” to tease my wife all the time.  I really like that song.  Other songs like “(You’re A) Gonowhere” and “In Dog We Trust” are well written and performed too.

As for Volume Two, call me crazy, but some of this sounds a lot like later period Royal Trux mixed with early Rollins Band, and maybe even some Iron Maiden-type metal leanings.  It was an album that could (and did) alienate fans of Reagan Youth’s pure DIY sounds on their debut, but it is just about as good as their debut.  The stylistic shift in some ways mirrored one made by Black Flag in their later years.  Most of the songs for Volume Two were actually old ones that the band had played around the time of the first album, but they didn’t feel were developed enough to record back then.  In an e-mail, guitarist Paul Cripple (Paul Bakija) said, “it alienated a lot of the punx that only liked Volume I . . . .”  He adds, “A lot of people don’t grow, especially musically and to think Reagan Youth was going to release an album, practically eight years later, that sounds just like their first…..well, those people are pieces of shit.”

The MDC song “Born to Die” was revived by Green Day at the 2016 American Music Awards, following the 2016 U.S. presidential election, with the lyrics changed to: “No Trump! / No KKK! / No fascist USA!”  Reagan Youth re-formed in 2006, after the tragic death of lead singer Dave Insurgent (David Rubenstein), and seem to still be active.  Will they now change their name to “Trump Youth”?