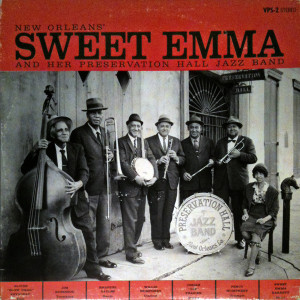 They call Dixieland jazz made after its time “moldy fig” music.  The Preservation Hall Jazz Band played their first touring gigs in Minneapolis, and Sweet Emma is a recording of one of them.  The band was started to provide jobs for aging musicians who played a style of jazz that had long since fallen out of commercial favor.  A venue named Preservation Hall was opened as a kind of museum and tourist attraction to showcase Dixieland jazz.  The band has featured a rotating cast of local New Orleans musicians through the years.  If you’ve listened to old, first-generation Dixieland records, this will probably not impress you much.  But it’s all still good fun.  This is unpretentious music that is exactly what it claims to be, no more, no less.