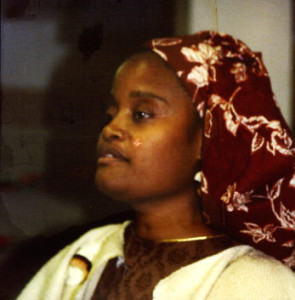 An eclectic and cool album from shamefully neglected Chicago musician Phil Cohran and his group Legacy.  Cohran was a one-time member of Sun Ra‘s Arkestra and a co-founder of the long-running and influential AACM organization.  African Skies was recorded live in 1993 at the Adler Planetarium in Chicago.  “White Nile” and “Blue Nile” are calm and fragile songs, with lots of strings, including harps — reminiscent of Brother Ah‘s Key to Nowhere. “Cohran Blues” has an almost rag-style beat, and it probably wouldn’t surprise if Leon Redbone had popped in for a vocal.  “The Dogon” features Cohran on his Frankiphone (his custom modified African thumb piano), which will take some listeners back to songs like “The Minstrel” from Cohran’s classic On the Beach with the Artistic Heritage Ensemble.  “Kilimanjaro” gets to that distinctive Cohran rhythmic style.  All this music takes influence from around the world. It’s an approach a little like Don Cherry but more composed.  It’s wonderful to see so many Cohran recordings in print on CD.  These things are more available now than ever. 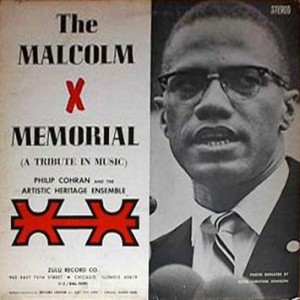 A truly remarkable album.  While not so recognizably distinctive as the Artistic Heritage Ensemble’s debut album On the Beach, The Malcolm X Memorial is just as fine an achievement.  This is a deep and effective meditation on the life of one of the most significant public figures of the 20th Century.  Phil Cohran‘s songwriting reaches a high water mark in setting out the four distinct phases of Malcolm X’s life, each of which is featured with its own song named after the appellation Malcolm used in that phase.  Rather than push Malcolm X’s agenda, or try to comment on his significance — socially, politically, or otherwise — Cohran simply creates a rich backdrop that portrays the context for Malcolm’s life.  Listeners can draw their own conclusions about what the man’s life meant, but in hearing this work they unmistakably witness a transformation from familiar and humble beginnings as portrayed by the spooky blues solo from guitarist Pete Cosey that opens the set, to the confrontational tone set by the increasingly busier and driving group arrangements in the middle of the album, to the expansive possibilities suggested by the decidedly non-Western flavor of the finale.  Recorded live, The Malcolm X Memorial features many wonderful performances that could hardly have been improved in a studio.  For instance, just listen to Aaron Dodd‘s lovely tuba solo on “Malcolm Little”, and the funky electric bass on “Detroit Red.”  This is a piece of music well worth attention, and one that rewards careful and repeated listening.  The Artistic Heritage Ensemble belonged to the upper echelon of performers of their time, and, albeit posthumously, they deserve wider recognition.