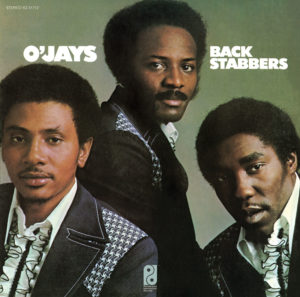 Soul music underwent a great shift in the early 1970s, from predominantly dance-oriented music with a big beat to a greater emphasis on harmony and layered complexity.  The O’Jays were one of the leading groups of the “Philly Soul” sound.  Back Stabbers basically takes up the socially-conscious approach of the likes of Curtis Mayfield‘s Curtis, Marvin Gaye‘s What’s Going On, and even Isaac Hayes‘ Hot Buttered Soul and Syl Johnson‘s Is It Because I’m Black.  But, of course, the difference here is the emphasis on a smooth, sophisticated construction with a hint of psychedelia.  So, “Love Train,” which closes the album, is pretty much one of the epic soul cuts.  It is the ideal embodiment of the way christian philosophy — by way of gospel music — lurked behind the end goals of black militancy in the early post-Jim Crow era.  Nothing else here comes close to that song, but, then again, little else in the entire genre does.  If there is a complaint here, and perhaps there should be, it is that The O’Jays lean too heavily on a kind of urban elitism (or should we say “New Age Racism”) that would soon crush the remnants of the soul genre and pave the way for the abomination that is smooth R&B.  This shows in the way some songs seem like safe, mainstream-ready adaptations of There’s a Riot Goin’ On (“When the World’s at Peace”).  And also in the way the string arrangements are a bit lazy and complacent.  So, there is a tension, with elitism being at direct odds with christian universalist values (The O’Jays would further complicate matters on later releases by trying to join christian universalism with its opposite: pre-christian, pagan “family values”).  This one just don’t quite hold up to its reputation, even if “Love Train” surpasses it.  Maybe check out David Ruffin‘s overlooked Me ‘n Rock ‘n Roll Are Here to Stay or Gladys Knight & The Pips‘ criminally under-appreciated Neither One of Us instead, or even The O’Jays’ follow-up Ship Ahoy.