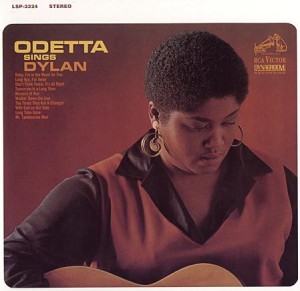 When Odetta covers these Dylan songs, she seems to make extra effort to change the songs around and, especially, sing everything to completely new rhythms and phrasings.  It gets very, very tedious.  She’s also very theatrical in her vocals.  What it reminds me of is singing songs in school or church when I was a small child.  In school there would always be some teacher who considered herself a good singer, and would sing loudly, and sometimes a box of instruments, like an “african fish” (it was kind of like a wooden washboard with a stick dragged across ribs on the side to make a rhythmic, percussive sound) would be brought out for accompaniment.  Similar things happened in church, though there was usually a skilled organist for accompaniment.  In either case the showy, self-important manner of singing louder and more prominently than everybody else was the key.  That’s what this recalls to me.  That, and amateur theater productions my mom was in when I was young, when she would take me and my brother to rehearsals.  I think I’m reminded of those times from childhood because this music feels like what you give to children because it’s safe, or whatever, and the kids just don’t relate and get bored immediately.  It’s like a gravely mistaken kind of pandering that turns out to be more about imposing the performer on the listener than trying to flatter the listener.