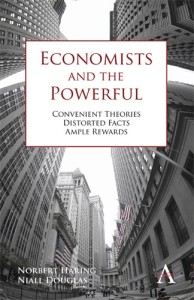 An interesting book on a topic that needs more widespread discussion. Häring and Douglas address the biases and fallacies that are pervasive in mainstream economics (long dubbed “the dismal science”), and gather evidence as to how those have developed and been reinforced because they favor the powerful. It’s a good effort, though a few limitations also deserve discussion due to the criticality of the topic. On the spectrum of political economists, the authors are highly supportive of Irving Fisher, and the post-Keynesian Australian economist Steve Keen who recently revived some of Fisher’s theories, as well as Daron Acemoğlu and a few others. On the whole, they somewhat self-consciously take a “centrist” or “compromise” approach that insists capitalism needs to be reformed in order to save it — a tactic sometimes referred to as “economism”. This leads them to primarily discuss the work of economists who utilize the same methods as the dominant neoclassical schools that favor neoliberal politics but reach conflicting, non-neoliberal conclusions. They devote little space to discussions of wholly different theories that might merit further empirical study. A number of times they stress that they are not advocating for socialism, and that nationalization is not necessary. Curiously, they offer no support whatsoever for those conclusions. One can speculate why they take such an approach. It is clear that the book is a critique of dominant ideologies, and not a critique of marginalized ones. But when they do offer policy proscriptions, their preemptive dismissal of some possibilities raises some doubts about the veracity of the claims. The most glaring aspect of that problem is that throughout the book the term “neoclassical” is used, as are “vested interests” and even “conspicuous consumption”. These are all terms coined by American economist Thorstein Veblen roughly a century ago. Yet Veblen is never mentioned by name, even though he was the first major economist to raise many of the critiques presented here. The first three chapters are the best. The last few come across as a bit less clear in their analyses, draw a few more dubious conclusions, and in general seems to suggest that even heterodox economists are a few steps behind sociologists, philosophers and maybe even some anthropologists on the topics of political processes, labor dynamics, and the like. For instance, at the end of the final chapter, they take an instrumentalist approach and suggest that the United States needs a constitutional reform committee to re-think legal structures that favor the rich and powerful. While they acknowledge that such a process could be captured by those same rich and powerful interests that need to be constrained, the very suggestion of such a constitutional committee is not tied very closely to anything discussed elsewhere in the book, and comes across as somewhat naïve. Sociologists like Frances Fox Piven and G. William Domhoff have explored such topics over entire careers, and neither makes such naïve proposals. Even Machiavelli said that the laws are the means by which the powerful oppress the weak. The preemptive dismissal of any solutions that might sound “revolutionary” remains the major limitation of the book when it tries to make recommendations. It is best when it offers a more readable and less technical explanation of some of the major flaws of mainstream (neoclassical) economics — making this perhaps more accessible to general audiences than books like Steve Keen‘s Debunking Economics: The Naked Emperor Dethroned, which tackle much the same issue. As a final note, another missed opportunity here — well within the confines of the authors’ thesis — involves a discussion of the accuracy of economic predictions and reliance on those predictions in the mainstream press. I recall a study someone did (the specifics and the citation elude me) that claimed the economists cited in the mainstream press were correct some tiny percentage of time (like 3%), and yet those same economists keep being cited for further predictions. Such evidence supports the notion that such economists are tools of the powerful (“useful idiots”), because otherwise economists with such poor track records of predictions (worse than, say, a weatherman’s record on forecasts) would have been discredited long ago.  It also echoes a quote frequently attributed to Donald Berwick (among others): “Every system is perfectly designed to get the results it gets.”