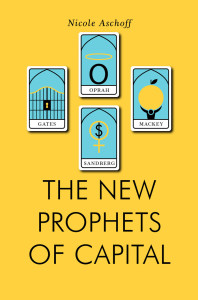 Nicole Aschoff has written a slender volume critiquing the programs of four modern “prophets of capital”: Sheryl Sandberg (on boardroom feminism), John Mackey (on conscious capitalism), Oprah Winfrey (on self-empowerment), Bill & Melinda Gates (on charity).  She adopts a journalistic tone, focusing on the “stories” told by the prophets of capital, and the sustaining narratives merely implied (or disavowed) by them.  She finds a common thread of support of capital over labor throughout, and sustained support for inequalities and hierarchies of power against egalitarian impulses.  These “prophets” present what appear to be corrections to the contradictions of capitalism, only to reinforce and reproduce the imposition of markets into more and more spheres of life.  The chapters profiling each prophet generally begin with a statement of what the prophets put forward to the public as the benefit they provide, followed by a critique that renders problematic the unstated assumptions and necessary preconditions.  The summaries of what the prophets preach are generally fair.  As to the critiques, there are no new arguments here.  Yet the critiques in the book work because Aschoff is well versed in theory, and she has done her research on all the standard left takedowns of these prophets of capital.  Luc Boltanski and Eve Chiapello are credited in influencing the book.  Slavoj Žižek, Pierre Bourdieu, and C. Wright Mills also loom large in structuring the analysis, even though each is only mentioned in passing.  If this has a flaw, it is sloppy editing (“Thomas Picketty” rather than Thomas Piketty, etc.).  Still, this is a welcome restatement of left positions, filling the near-vacuum of accessible, readable books from the political left.  Lee Drutman has argued that the solution to the problem of lobbying in politics is — paradoxically — more lobbying.  In a similar way the solution to the way mainstream media frequently resembles a right-wing echo chamber may be to have a bit more of a left-wing echo chamber for balance, and The New Prophets of Capital serves in that role admirably.