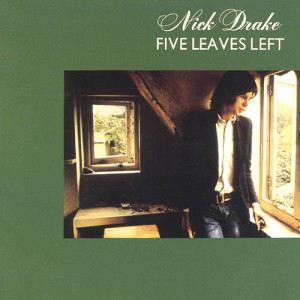 Nick Drake’s debut album Five Leaves Left was a rather unique recording that didn’t seem enmeshed in any sort of widespread movement.  Fans often remark that his music seemed to come from “nowhere”.  He never achieved much commercial success before his early death, partly due to his limited efforts to tour or promote his recordings.  Still, his renown has grown tremendously since his death.  Nick Drake is the sort of musician who came along ahead of of more widespread efforts to render a feeling of failed promise, which is to say failure to live up to potential.  This is very inward-looking artistry.  Extroverts may appreciate Drake from a distance without really warming to him more intimately.  His music is somewhat elitist.  Its lyrics are informed by the sort of poetry studied in “classics” courses in elite universities, and the orchestral treatments and delicate guitar playing (Drake was an impressive guitarist) pay homage to Euro-classical compositions.  Yet these are pop songs, which underscores the way the music has a familiarity with highbrow culture but turns away from it, if only slightly.  It is the devastating earnestness of Drake’s songwriting and performances that keeps this from being pretentious.  This album leans toward the counterculture, but from a privileged place that manages to satisfy every criterion of dominant culture.  More than anything, that was Drake’s real achievement.  He managed to hold together seemingly incompatible forms in a way that never for a second seems like a juxtaposition at all.  The stark, flawless Pink Moon may well be Drake’s finest album, but Five Leaves Left is great too, and hardly a step back at all (saying so is a matter of splitting hairs). 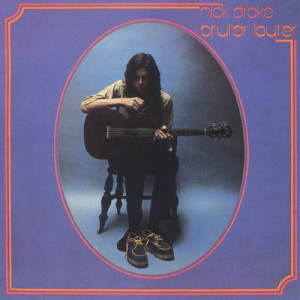 If you will bear with the analogy a bit, Nick Drake’s music in some ways represented an alternate path from that of Neil Young.  Both artists represented ways of dealing with the failure of the 1960s counter-cultural movement.  In Young’s case, he did two main things.  One, he played scuzzy, grungy electric guitar in a way that scared off those not attuned to the counterculture.  That approach proved difficult to maintain though the drug-fueled hedonism of the 1970s.  He made a good go of it though!  Second, he incorporated country music into his sound, suggesting that he looked for support beyond urban environs, toward the rural dispossessed.  All these things had Young carving out a separate space away from mainstream culture.

Nick Drake approached conventional pop music unabashedly.  In a way, he was adapting to and working with mainstream pop.  But he was also reformulating it.  Bryter Layter, frequently described as an extension of his debut Five Leaves Left and the most hopeful of his three albums, comes closest to radio pop.  But his attitude toward mainstream pop is to wonder about his place in it.  His pop music innovation is his reflexive approach to it.  Most of these songs are about the hope and promise of the future, approached with trepidation and uncertainty.  Drake sings with a breathy, waif-like voice.  He seems to pursue a very radical christian program of fighting his battles with weakness.  But unlike Neil Young, Drake heads right for mainstream music with his deeply personal take on it.  What links the two seemingly disparate performers is that neither can accept the extroverted world as it is.  What differentiates them most is the lack of catharsis in Drake’s music — that is kind of the defining trait of Young’s music.  Making music seems almost to deplete Drake, but he makes his music anyway.

There are a few songs on this album that seem a bit saccharine: “At the Chime of a City Clock,” “Bryter Layter” and “Hazey Jane I.”  But there are more that weave a richly compelling sonic fabric: “One of These Things First,” “Northern Sky,” and “Hazey Jane II.”  Drake may have the qualities of a poor little rich kid, but his music also stands as an example of the best that can come of such circumstances.  This isn’t Drake’s best album — that would be Pink Moon.  It is still a pleasant one, and Drake doesn’t have a bad album to his name. 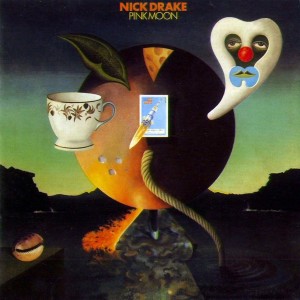 Nick Drake was an overlooked but extremely talented individual.  Pink Moon is his most intense and ultimately best album. Sweet pop melodies and deep, intelligent songwriting are Drake’s trademarks. His refreshing approach moved far beyond simple love songs, with breathtaking but sad results.

The interaction between a man, his words, and his expression are profound. Gone are the lush strings and grand arrangements of his past work. Yet Pink Moon is incredibly expansive for just a singer with an acoustic guitar.

Where his previous release, Bryter Layter, looked towards better days ahead, Pink Moon begins by evaporating all hopes of happiness and grasps a bleak reality. The title track signals the break from his earlier work, and is the only track featuring piano. “Place to Be” then settles into blind depression. The brilliant guitar work on “Road” fills up space. While others may dream, Drake can only continue his static existence. He struggles just to understand his situation.

Drake is powerless to change himself or his world. On “Which Will,” he is a pawn held under someone else’s control. The instrumental “Horn” breathes a lingering sigh. He has not yet reached the point of acceptance. Side one ends with the cold observations of “Things Behind the Sun.” From a detached viewpoint, he collects thoughts and experiences.

Side two represents Nick Drake’s dawning awareness. “Know,” with just four lines of verse, evidences a new approach to life. The self-hypnosis of his guitar and chanting demonstrate his commitment to change. “Parasite” is one of the most gripping songs on the album. He finally opens his eyes wide and finds his place in a larger order. True to character, Drake portrays himself like an infection dragging failure to foreign places. Passing through a self-imposed exile, he sinks deeper into sin and despair. “Free Ride” is a plea for help, but “Harvest Breed” finds Drake freed to exist as an isolated oddity. He calmly stands in the face of his insecurities.

Concluding with “From the Morning,” Drake looks back on his travels. He takes his lessons on a final journey. His story ends in wry reflection. Nick Drake died a few years later, only 26, from an overdose of anti-depressants.

Pink Moon is a choreographed dance. A brilliant autobiography of genius, this was Nick Drake’s last gasp. Falling squarely between a comedy and a tragedy, in the classical sense, Pink Moon is ultimately an unassuming fragment of universal truth. It would be hard to say any other singer/songwriter ever produced such an immaculate album.