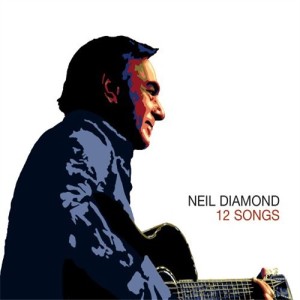 People seem to have this bizarre faith in producer Rick Rubin, like he can waltz in and “save” the career of any aging star fading into obscurity with declining sales.  Not so.  Take 12 Songs for instance.  Unlike the American Recordings series with Johnny Cash or on Electric by The Cult, Rubin is all wrong for Neil Diamond.  Cash’s biggest asset was that voice, which in spite of its age could still captivate with its gravelly power.  Cash also could command with that voice, and stripped down settings put that voice on a pedestal — like Paul Robeson‘s recordings accompanied by only Lawrence Brown on piano.  Diamond, however, was always at his best with a very smooth and nuanced bombast.  Well, all that is gone here.  Nothing left to see or hear, just a fish out of water.  Rubin would have been much better served looking back to his breakthrough work with The Cult, where he — again — stripped down the production but at the same time preserved some (OK, amped up) of the ridiculously fun machismo.  Rubin may have dumped what was weighing Neil Diamond down in adult contemporary purgatory, but he also threw out most of what makes Diamond likeable in the first place — that swagger!  Final conclusion: a swing and a miss.