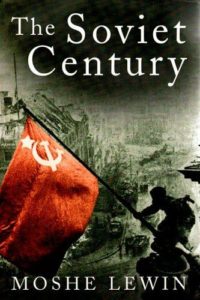 Moshe Lewin was one of the great historians of the former Soviet Union writing in English.  He actually lived in the Soviet Union for a time, working on a collective farm and later in the Soviet Army, eventually ending up in the West in academic positions.  His breakthrough book in the late 1960s was the superb Lenin’s Last Struggle (first published in French), which here he confirms was on the right track but which formerly secret documents now show did not go far enough in establishing how much Lenin despised Stalin and his political ambitions.  What separates Lewin from so many other English-language historians is that he approaches the Soviet government, and its attempts to realize the “communist hypothesis” (Alain Badiou‘s term), in a sympathetic yet critical light.  Mostly that takes the form of accepting the original Bolshevik objective in founding the USSR, together with rather commonplace statistical measures and evaluations against the government’s own internal objectives, and asking how well the government operated against those sorts of metrics, in context, without dwelling on the insentience that Bolshevik objectives were and are normatively wrong.  As Lewin puts it near the end of this book:

“Reflection on the USSR has been marred — and still is — by two frequent errors . . . .  The first is to take anti-communism for a study of the Soviet Union.  The second — a consequence of the first — consists in ‘Stalinizing’ the whole Soviet phenomenon, as if it had been one giant gulag from beginning to end.

“Anti-communism (and its offshoots) is not historical scholarship: it is ideology masquerading as such.”

To that end, Lewin occasionally reminds readers how anti-communist detractors are often quick to criticize the Soviet Union while at the same time overlooking similar if not worse occurrences in other countries.  Such a decontextualized approach he likens to propaganda.

Lewin does not resort to hagiography or fawning praise for the former Soviet Union.  He does hew pretty close to the Lenin/Trotsky analysis of the new nation’s prospects for becoming socialist (which in turn drew from various non-Bolshevik commentators of the day), describing Stalinism as “agrarian despotism” that rebuilt many aspects of the failed tsarist system, and the post-Stalin period as “bureaucratic absolutism”.  As Lenin and Trotsky both believed that it would take a long time and much effort to actually reach socialism, Lewin looks back and finds that socialist objectives were never achieved (though such conclusions can be taken too far, suggesting an impossible purity).  But he is ready to credit many advances in industrialization, literacy and education, feminism, science, life expectancy, and so on, plus a critical role in the defeat of Nazism.  He laments how some scholars have omitted the decline in many of these measures after the fall of the Soviet Union — he likens the immediate post-Soviet economy to a “mafia” capitalism, something that he suggests materialized in part because there was already a kind of privatization of the commons underway in the late Soviet era proper.

The book is not a chronological history, but rather is more of a collection of essays on various topics.  This fits in the category of reflective history, cutting across subspecies of universal, pragmatic, critical and fragmentary methodologies, following Hegel‘s taxonomy in Reason in History.  What emerges here is a useful portrait of the administrative and bureaucratic aspects of the state, and how those elements rose and fell, and engaged in internal fields of struggle with other social elements.  The segments on Stalinism make for difficult reading, given the gruesome nature of arbitrary persecutions that involved massive waves of executions and institutionalized slavery via the gulag system.  And yet, Lewin admirably traces the both the rise and fall of Stalinism, and some of its lingering effects.

There is an enlightening segment tracing the careers of various post-Stalin politburo members (i.e., the top leaders).  Lewin shines in some of these portraits, drawing on a host of memoirs from these figures and the people working around them, as well as from reports made public only decades later.  He skips past many of these politicians as hapless fools, and focuses only on those with wits about them.  Khrushchev is the first of them.  He was a kind of country-bumpkin of sorts, who did numerous admirable things leavened with politically naive mistakes.  It was Khrushchev who dismantled the gulag system and instituted reforms of the NKVD (the predecessor to the KGB that operated the gulags) and the state’s dependence on the economics of gulag slave labor.  And yet, he was ousted and the incoming Brezhnev regime was neo-Stalinist in some respects, setting the stage for overall decline based on a tendency to corruption (including, in Stalinist style, blaming all mistakes on the lower rungs but taking all credit at the top) and ineffectiveness (epitomized by surrounding the general secretary with mostly dumb, non-threatening, and self-interested loyalists).  For comparative purposes, the Khrushchev era offers useful examples for how the dismantling of corrupt and discriminatory policing structures in other countries, like the United States, might proceed, and the challenges those efforts will face during the inevitable pushback by those invested in the status quo.  Andropov is the most interesting figure chronicled (I admit to being unfamiliar with him until this book).  A former head of the KGB, he was well-informed about the unvarnished facts of the state’s decline and inefficiency, and encouraged free communication in his office, thereby developing new theories and rapport with officials who reported to him.  This is surprising, in that he was seen as part of the conservative Brezhnev block and headed the KGB — although he was a liberalizer when it came to internal political repression via the KGB.  Although Andropov died too quickly to achieve anything of significance once he assumed the position of general secretary, Lewin ponders what a vaguely Leninist but quite radical restructuring of the state under Andropov might have accomplished to avoid the entire state’s collapse a decade later (most likely a sort of New Economic Policy [NEP] part two).

Another memorable passage is Lewin’s takedown of the writer Aleksandr Solzhenitsyn.  He says, “Solzhenitsyn considered himself the depository of higher values inherited from Russia’s distant past[,] *** [a] fine writer, but politically inept and with a highly inflated sense of his own importance . . . .”  He considered him a dubious source of information on the gulag system, quoting extensively Vladimir Lakshin, of the literary magazine Novyi Mir, an outspoken contemporary Soviet critic of Solzhenitsyn.  Lewin also suggests that Solzhenitsyn was a bit of a fraud in the way he criticized the gulag system after it was essentially dismantled, without ever explicitly noting that the gulag system was already a relic of the past.  He sees Solzhenitsyn as finding notoriety principally via anti-communists who didn’t question his underlying reactionary anti-democratic impulses.  These are biting criticisms, and worth reading for anyone who might otherwise rely on Solzhenitsyn.

Lewin is a fine writer and historian, drawing mostly from secondary sources with a scrupulous eye for their shortcomings and biases.  This is still “eat your vegetables” sort of reading, though well worth it in terms of revealing a lot of information that was previously secret during the Soviet era and most certainly presenting a view of the former Soviet Union not regularly taught (or even suggested) in Western schools.  It would have been nice had Lewin included a few more topics, such as more about the arts, and some sort of discussion about ecology (in a country whose government basically destroyed the Aral Sea).  But no matter.  Historians have a tough task, in that mere collections of isolated facts serve no purpose, and meaningful histories tend to require the application of theory from sociology, political science, and even, in the case of sketches of important personages, psychoanalysis.  Lewin proves adept in many of those areas, even if he occasionally stumbles by suggesting that it is possible for historical analysis to step outside of ideology and be “objective”.