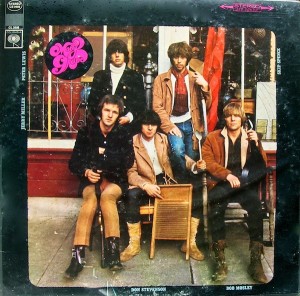 “How” and “why” are two very big questions. Moby Grape doesn’t claim to prove either, but it puts a finger on the pulse of the times. Nothing is missing. Whether countrified frat-rock, folky soul, booglarized blues, groovy psychedelia, or all of the above, every song is a unique experience. Moby Grape embodied something bigger than themselves. The many tensions inside and outside the group proved no obstacle. Intuition is bound by no master. This music just puts a smile on your face.

It’s easy to lose track of all the San Francisco bay-area legends that came out of the late Sixties. There were just so many. Was it something in the water or something in the orange juice? Even among giants Moby Grape is an album that stands out. It comes close to sounding dopey, but that makes it uplifting. The ragtag charm balances out the hippie wit.

The band’s lineup looked good on paper (they were sort-of a minor supergroup). That only makes their debut more improbable. Moby Grape’s three brilliant guitarists, Jerry Miller, Jr., Alexander “Skip” Spence, and Peter Lewis, take each solo a step beyond all expectations. Don Stevenson and Bob Mosley round out a rhythm section that kept the eclectic brew rumbling forward. It’s hard to believe the band only had three guitarists. Nothing is the same twice. “Fall On You,” “8:05,” “Someday,” and “Indifference” are unlikely efforts to fit seamlessly on one album. The reason the album is seamless that there isn’t even a thread holding it together. Everything just aligns. Each musician brought something different to the table. They seem to find a way to use every idea, while certain independence remains with each contribution. You can understand it differently every time you listen.

Moby Grape is most amazing for what it fits into thirteen songs. The songwriting is every bit a great as the musicianship. Miller’s “Naked, If I Want To” is a short and sweet statement of individuality. Miller and Stevenson’s “Hey Grandma” is one of the up-tempo rockers with plenty of time for dazzling guitar work. Songs like those and “Omaha” deserve revisionist status as classics. That squeaky drum pedal on “Indifference” is the clincher.

The band hardly survived, but this album did. It was a short, strange trip indeed. Moby Grape is a great example of how the “we can all get along” peace & love thing was certainly attainable. If you can grasp the way this album keeps from falling apart, you’ve got the bigger ideal figured out.