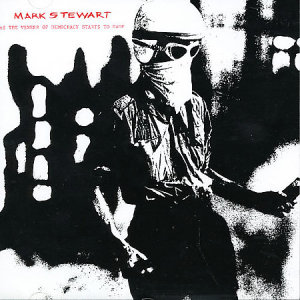 Mark Stewart always seems to make music the hard way.  He takes the most harsh, unpalatable material as his source and from there tries to service (a) a beat and (b) a slogan.   It’s maybe no surprise that an album titled As the Veneer of Democracy Starts to Fade is going to have some political content of a certain variety.  But Stewart’s greatest achievement really lies in his industrial hip-hop beats.  They do serve him well as a rallying cry amidst the rubble.  They also provide a sense that an artist can eschew anything of contemporary commercial value and still work out a beat that connects with listeners (admittedly, not all listeners, but still…).  That’s the really radical aspect of this endeavor — it has no need for the establishment.  This falls on the militant side of things, but strangely enough like Flipper across the pond, this is music that at its core tries to be incorruptable.  It’s a lot more frightening and satisfying than Ministry, a U.S.-based band that comes to mind in this arena.   It’s also a bit harder edged that Moebius‘ early 80s work, which otherwise has some similarities.  It is worth picking up the expanded CD reissue of the album, because the bonus tracks there definitely help the album, which almost starts to slip on side two.