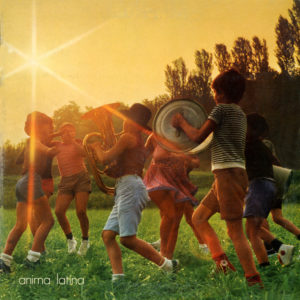 Here’s an album that seems to be an unlikely Rosetta Stone for much of European rock and pop of the 1970s.  Anima latina (“Latin Soul”) is perhaps Lucio Battisti’s most acclaimed album.  He was a big pop star in his native Italy, though internationally (especially outside Europe) he was and is less well known.  The music ranges from (symphonic) prog rock to Canterbury Sound psychedelic jazz-rock, with ambitious, arty meanderings, laced through with understated brass horn charts and diffuse synthesizer figures.  Most of the songs are over five minutes in length.  None are structured like catchy pop hits.

The opening “Abbracciala abbracciali abbracciati” sets the album off well.  This is high drama.  The effect is a bit like a darkened theater, a huge one, with an assemblage of musicians in an orchestra pit somewhere out of sight, but a lone singer in a dim spotlight delivers a searching, allusive and almost existential song in halting yet eloquently delivered statements.  There is sparse percussion.  Yet the drums are played with such pauses as to mean there is no real syncopated beat as such — duh(ch), duh, ____du-chashhh___.  Behind the drums, the song opens with a sustained but subdued synthesizer chord and a solitary trumpet (electronically processed most likely) playing long, faint notes that seem to move toward an unfinished statement, without ever realizing a melody.  There isn’t a whole lot of singing.  Battisti begins just by singing wordless sounds.  The singer isn’t so much a protagonist as someone who has stumbled into the song.  At least, every effort is made to make this the appearance.  There is never any doubt that this is a staged performance.  As the song continues, the drums and a bass provide more of a steady rhythm.  If there is a comparison for “Abbracciala abbracciali abbracciati,” it is perhaps Neil Young‘s opening to Tonight’s the Night (recorded before or at the same time but released after Anima latina), or the more frequent comparison of Robert Wyatt‘s Rock Bottom (released the same year).

The rest of the album ranges from spacey, swirling meditations to funkier tunes that get a decent groove going.  The album title alludes to a South American influence.  This is a subtle but important presence throughout the album.  The influence of samba, perhaps even tropicália, in the rhythms (“Due mondi,” “Gli uomini celesti (Ripresa),” “Macchina del tempo”) and some of the horns (“Anonimo,” which flirts with tropicália’s reverent/irreverent use of kitsch), and the burning intensity of Argentinian folk-rock (“Anima latina”), all make themselves felt.  Rather than the clinically calculated shifts in unusual time signatures and other technical feats that make a lot of prog- and jazz-rock kind of distant, even tedious, Anima latina leans on warm and organic rhythms to tie all the experiments and shifting concepts together.  That is crucial.  It lends a suppleness that gives the otherwise very arty aspirations of the album a beating heart.

If prog rock remains the core referent for the style of the album as a whole (and especially toward the end), it is worth noting that most of the guitars are acoustic.  There are no electric guitar heroes here, or flashiness of any kind really.  More than any one dazzling performance — even by Battisti — this is an album that succeeds based on its structure.  The ebb and flow of the songs, the deliberate pacing and wide open spaces emerging from the sonic fabric, anything that is the implication rather than the direct content — these are the things that make Anima latina captivating.  There isn’t one right way to hear this music.  In Criticism and Truth, Roland Barthes wrote that “a work is ‘eternal’ not because it imposes a single meaning on different men, but because it suggests different meanings to one man…”  That provides an apt reason to listen here.