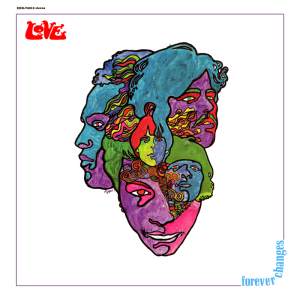 Forever Changes is probably the single greatest statement in rock and roll on the unanticipated dark side of the whole yippie/hippie thing of the late 1960s and early 70s.  Hunter S. Thompson wrote about “the grim meat-hook realities that were lying in wait” for anyone who took Dr. Timothy Leary’s “turn on, tune in, drop out” consciousness expansion ideals too seriously.  And it is from about that perspective that Forever Changes resides.  Much of the lyrical content conjures up a process of reflection and expanding self-awareness.  But it’s in the context of recognizing that with all the great possibilities in life there come a lot of obstacles and disappointments.  Funkadelic had an album a few years later titled Free Your Mind… and Your Ass Will Follow.  Well, in between freeing your mind and everything else falls a lot of stuff.  Heavy stuff.  So what of all the others who haven’t freed their minds, and the difficult possibility that those people (actively or not) stand in the way of anything further?  Grim and meat-hook possibilities indeed.

Part of what makes this album unique is that Love was an unlikely band to have made it.  The songs are drenched in orchestrated strings and laced through with latin and Euro-classical-tinged acoustic guitar.  Earlier Love recordings like “¡Que Vida!” from Da Capo hint at it, but most of the group’s best material to this point was in the vein of garage rock (“Seven & Seven Is”, “My Little Red Book”) or psychedelia (“Stephanie Knows Who”, “She Comes in Colors”).  And that makes the kind of naive sense of bewilderment so pervasive here as convincing as it is.

There is something timeless in this too.  The immediate context was the Vietnam war era, but three or four decades later couldn’t the lyrics “they’re locking them up today/ they’re throwing away the key/ I wonder who it’ll be tomorrow/ you or me?” from “The Red Telephone” refer just as well, and more literally, to Guantanamo Bay almost four decades later?  And that’s just it.  The complexities and difficulties of life that consume Forever Changes are ones that still linger.  They touch on things deep and vast.

Of course, the unmatched blend of optimism and loneliness of Bryan MacLean‘s “Alone Again Or” makes it basically a perfect song.  But then the same greatness can be attributed to the epic “You Set the Scene”, which is the summation of everything that precedes it.  Arthur Lee sings “and for every happy hello/ there will be goodbye”, but later reiterates “and I face each day with a smile.”  The tensions, contradictions, wonder and cautious acceptance that permeates the song is the same feeling that carries the rest of the album.  That song is also a great example of how so much of the album makes a contemplative, searching state of mind so palpable.  Even if the music deals with the downsides of the cultural artifacts it considers, in the end it still finds them worthwhile.  Nothing good comes without hard work and struggle!

I have wavered in my appreciation for this album over the years.  I loved it at first, but then changed my opinion and thought it lightweight and superficial for a while.  But I came back around, and I think for good.  This is the real deal.  Whenever I come back to it, I’m more impressed than before.

If you have no sense of wonder, or just can’t see anything in yippie/hippie culture, this album probably won’t hold interest for you.  But for you, I am sorry, for you have missed out.  This album has rightfully earned a place among those few and rarefied that are worthy of a lifetime of listening, and that can actually re-frame your whole point of reference as a listener.