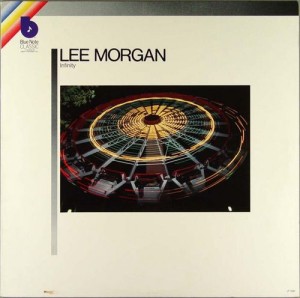 It’s pretty amazing that Lee Morgan’s Infinity album sat in the vaults for so long before seeing release.  In an effort to duplicate the success of The Sidewinder, Lee Morgan was making a lot of recordings in the mid-1960s.  His reputation is that he was something of a hard bop reactionary.  And I suppose that the 60s were a unique time in that there was never again to be such a large number of musical giants performing jazz at the peak of their careers combined with a comparable level of commercial interest in the music.  The commercial decline of jazz music had a profound impact on how many young musicians chose to play jazz (rather than rock or something else) and what labels and venues were willing to support.  So, for a brief moment in the 1960s, Infinity many have seemed like “just another hard bop album” and therefore not commercially viable enough for release.  And to a certain extent that might have been true.  This might have been lost in the shuffle around the time it was recorded.  But it’s also another pretty good hard bop album.  The songwriting is above average, there are some top players here, and it all comes together in some commendable performances.  While I don’t want to make it seems like this is some groundbreaking lost classic, this album does certainly hold its own with the better hard bop albums of its day.  Particularly thanks to Jackie McLean, I think this is even a bit more rewarding than some of the better-known, though overrated, hard bop albums of the period.