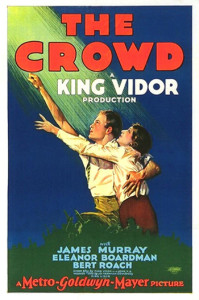 King Vidor’s silent film “The Crowd” was the most acclaimed early feature to use a melancholy, existential ending where a character with great aspirations learns to accept a life short of that, in this case as an anonymous failure.  This would become a sort of film staple, especially in “art house” cinema, with similar examples ranging from Yasujirō Ozu‘s Otona no miru ehon – Umarete wa mita keredo [I Was Born, But…] (1932), Ingmar Bergman‘s Sommarlek [Summer Interlude] (1951), and Satyajit Ray‘s Apur Sansar [World of Apu] (1959), to name a few.  This is one of Vidor’s very finest films — up there with Our Daily Bread (1934).  The pacing is meticulous and graceful, the humor well-placed, and, of course, the acting superb.  Large parts of the film are shot on location — a rarity for Hollywood films of the era — and the sense of realism that the bustling city shots provide is really a useful counterpoint to the ambitions of the protagonist John Sims (James Murray).  But what separates The Crowd from much of what simply has a similar ending is that this is a film that from beginning to end is about ordinary people.  It is not an epic.  There is no hero.