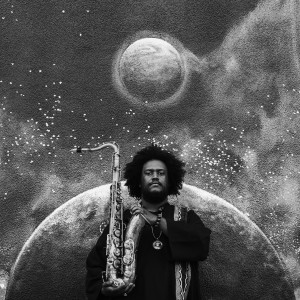 Washington’s studio debut album, the sprawling three-CD The Epic is organized as a kind of summary of jazz of the last 60-70 years meant to be as accessible as possible to audiences more familiar with hip-hop.  This veers toward the sorts of jazz sampled the most in hip-hop: fusion, organ-driven soul jazz, urban smooth jazz/acid jazz, slick L.A. jazz with a big-band vibe, 70s “spiritual” jazz; plus there is a heavy dose of classic quartet period Coltrane — for credibility.  Though certainly The Epic avoids entirely the comically paternalistic zip-zap-rap jazz/hip-hop hybridization of corny bands like Buckshot LeFonque.  Hip-hop is only implied, by omission.  One device that is particularly effectively used are late 1960s style vocal choruses to build momentum (though the vocal solos are less impressive).  In the end, the album succeeds in its rather modest ambitions.  It doesn’t really expand upon anything it alludes to.  There is no attempt to break any new ground.  Yet it genuinely gets in tune with the historical precedents it recreates, demonstrating a kind of deference and respect, while always seeming fully committed to its project without irony or detachment — sometimes the leading innovators can’t do such things well because they get bored or become condescending.  It also adopts certain bygone styles that never really bubbled up to wide audiences, because they were ones always committed to a space largely outside (and often opposed to) the strictures of big business music.  That makes it all the more significant to recreate these particular styles now — more significant than other retro-focused practitioners like Wynton Marsalis recreating jazz forms from exclusively before its democratizing, liberation movements.  Anthony Braxton named three categories of musicians/music: restructuralists (the revolutionaries), stylists (who expand upon existing concepts) and traditionalists (who work within existing forms).  The Epic is a traditionalist recording.  If you want a more challenging run at the same concept from a stylist rather than a traditionalist, you could go back to early Norman Connors, or maybe even James Carter‘s Conversin’ With the Elders.  For a sort of textbook-like primer of modern jazz from about 1964 to maybe 1979, though, this is about as good as can be hoped.  Of course, jazz heads might get bored with this as much as a tenured professor would reading an introductory textbook, but they should lighten up and accept the premise of this music, which is sort of to popularize the stuff they have been familiar with since the beginning.