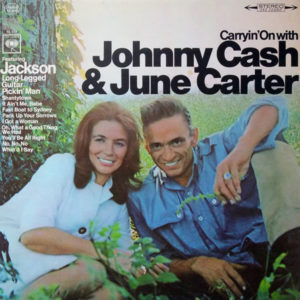 Well, this one is quite a trip.  It’s a nice set of generally upbeat songs from the duo of Johnny Cash and June Carter, who would get married the following year.  In spite of a few songs that don’t quite work (like the Ray Charles songs and the dumb “Shantytown”), this manages to be more than the sum of its parts.  Rather than going for the kind of substance of Cash’s concept albums this is just a bunch of random, fun music.  It maintains a great energy throughout, and there is some fine guitar and piano playing to boot.  This is the kind of album that plays well in mixed company.  [Note: “It Ain’t Me, Babe” seems to be a duplicate of what was on Cash’s Orange Blossom Special].