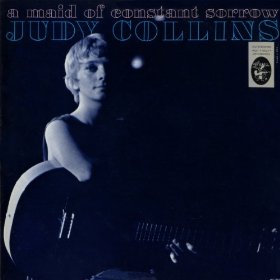 A nice debut from the sadly neglected Judy Collins.  At this time, she sang with a slightly husky tone as if honed performing belting her vocals at a near shout, without amplification, at some Greenwich Village coffee house.  Comparisons to folk stars of the previous decade like Pete Seeger are àpropos.  As Collins evolved, she incorporated elements of Broadway theatrics, with a lighter touch and more legato phrasing.  But those techniques lay in the future back in ’61.  Yet even from the beginning she clearly had quite a voice.  Enjoy. 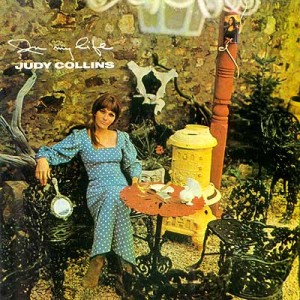 I have always rather liked Judy Collins’ voice.  She resembled English folk singers like Sandy Denny and Linda Thompson (or more accurately, it was the other way around).  Collins is often described as “Elektra records’ answer to Vanguard Records’ Joan Baez.”  Collins began as a traditional acoustic guitar folk singer, and that description may have held true for a time.  But with In My Life she began what many consider her “art pop” phase.  Rather than simple acoustic guitar treatments she was adding string arrangements and performing material from a wider variety of styles such as theater songs.  And she dressed up the core of folk music with something other than rock influence.  It is appropriate to identify Collins as an innovator in this regard, because In My Life quickly showed influence, directly or indirectly, on a lot of other works in the coming years:  Nico‘s Chelsea Girl, Phil Ochs‘ Pleasures of the Harbor, Tim Buckley‘s Goodbye and Hello &c.  The album proved an important stepping stone in developing the more elaborate and ornate sounds of the singer-songwriter movement that followed the urban folk revival.  You can even find traces of Collins and In My Life in such works as far apart in time as Joanna Newsom‘s Ys and Have One on Me.

What we have here is a bit inconsistent though.  Collins does well with Randy Newman‘s “I Think It’s Going to Rain Today” and Donovan‘s “Sunny Goodge Street.”  She also delivers some nice vocals on Bob Dylan‘s “Tom Thumb’s Blues,” where her vocal phrasing is wholly new and nothing like Dylan’s.  That song is a bit like the mad tea party in Lewis Carroll’s Alice’s Adventures in Wonderland, because Collins’ assured voice set against the surreal and absurdist context of Dylan’s lyrical landscape is like the logical Alice precociously befuddled by the social antics of the Mad Hatter and friends that she does not understand.  It reveals in Dylan’s song an almost coming-of-age quality.  Where this stumbles, though, is with some of the song selections and the instrumentation and arrangements.  “Tom Thumb’s Blues” has a rather nondescript string treatment, and it doesn’t quite live up to the power of Collins’ vocals.  The theater numbers vary.  Brecht/Weill‘s “Pirate Jenny [Seeräuberjenny]” is ill-suited to her, though “Marat/Sade” (a medley from the Peter Weiss play) works.  Jacques Brel‘s “La Colombe” isn’t quite right either (try Scott Walker from the following few years for superior interpretations of Brel).  But you can draw an almost direct connection between this and the ways West Coast singer-songwriters and interpretive pop singers would emerge in the coming years, though it’s obvious that Collins took a more serious approach than others who followed.  “Marat/Sade” may be from a musical, but it’s no Andrew Lloyd Webber pap.  The studio musicians turn in performances throughout that are polite and competent but not always particularly engaged.  Joshua Rifkin‘s arrangements don’t always do enough to tailor themselves to Collins’ singing.  This is now more a period piece than anything, but a nice one at that.  It has certainly grown on me since my first listen.