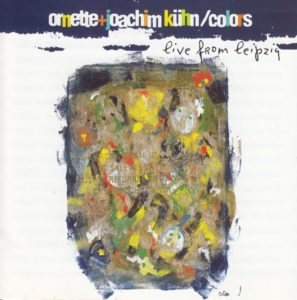 If there is a problem with Ornette Coleman’s later years, it is that the central question of “freedom” addressed by his music lost its immediacy.  This is to say that the problem of a lack of freedom had an immanent character in the late 1950s and early 60s when he first rose to prominence, when racial segregation and so forth were the norm.  But after the 1960s came to a close, and as Ornette became (perhaps grudgingly) accepted as an elder statesman of jazz.  At this point wasn’t he “free” and the game over?  This is to say the pursuit of freedom in “free jazz” doesn’t really mean much if the listening audience doesn’t recognize that pursuit juxtaposed with certain conditions of non-freedom.  So the question becomes, yes he is free, why does that matter?

There was plenty of space for Ornette to pursue amusements from the 1980s onward.  There was much more of a tendency for his later music to be meditations on very elemental but also very innocent pleasures.  Songs like “Latin Genetics” (from In All Languages) come to mind here.  But, that is also misleading.  Because as time went on Ornette managed to use that approach to probe the banality of modernity.  With mixed results, this lead to Virgin Beauty and Tone Dialing, though the approach started earlier (like “Mary Hartman, Mary Hartman,” the theme song from a daytime TV show, on Soapsuds, Soapsuds). He was also doing comparisons between his musical ideas and established ones.  So Tone Dialing included “Bach Prelude.”  This was a more academic approach, perhaps, a kind of open dialog.  But it also was a kind of scientific attitude of sorts that looked at the way his (arbitrary) methods emerge from the conditions around him and how other circumstances faced by others produce different, or even slightly similar methods.

Joachim Kühn is a pianist raised in the former East Germany (GDR).  He had classical music training but turned to jazz when beginning his professional career.  It is Kühn’s classical training and seeming affinity for the Second Viennese School‘s chromatic expressionism that makes him a rather perfect pairing with Ornette.  The two players are able to meander endlessly, usually independently, but also with Kühn reacting to Coleman.  There is plenty of space in these performances for reflection.

Coleman notoriously avoided working with pianists most of his career, to avoid locating a tonal center on the fixed keys of a piano.  But late in that career, he kind of had nothing to prove, and in fact could prove that he was not bound to tonality best by working with a pianist anyway!  Ornette still plays in his trademark way, with practically no vibrato and with lines that tend to sustain the high notes.  There is little of the R&B influence of Ornette’s early recordings.  No matter.  These performances are wonderful.