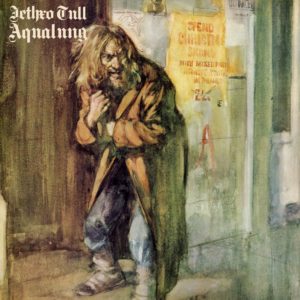 Jethro Tull alternated between folk/folk-rock and prog rock.  They generally come across to these ears as at best a second-tier offering on both fronts.  For folk/folk-rock, they make me wish I was listening to The Pentangle (or Bert Jansch solo), and for prog rock I’ll take Traffic.  Frankly, though, Aqualung leans more heavily on the prog side of things and the heavier electric guitar proves effective.  The band was known for the gimmick of having a flute, but the flute and the vocals are mostly a distraction.  This is still a very adequate album.

One question that jumped out when listening to this album is whether all prog rock is inherently misogynist.  As a genre, it tends to appeal — in a painfully obvious way — to sexually frustrated men.  It seems to lack any kind of feminine qualities.