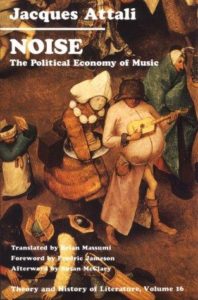 Jacques Attali’s Bruits [Noise] was first published in French in 1977, then in English translation in 1985.  It presents a long-term history of musical development, based on Attali’s novel theory of distinct stages of historical development in music.

As historiography, this bears much resemblance to other characteristically French stuff from back in the day as Henri Lefebvre‘s Critique of Everyday Life.  The focus on music as an expression of power (and struggles for power) also ends up placing this in a vaguely similar place as Pierre Bourdieu‘s Distinction, as well as Carles and Comolli‘s Free Jazz/Black Power.  Additionally, the reliance on stages that structure the political economy of music also bears some similarity to Walter Benjamin’s famous essay “The Work of Art in the Age of Mechanical Reproduction” and Bejamin’s work more generally, as well as to the “world-systems” school of thought that includes the likes of Immanuel Wallerstein and Giovanni Arrighi.

Attali’s focus on political economics is welcomed, from the standpoint of being something so often overlooked in these sorts of histories (there are some exceptions of course).  On the other hand, despite later becoming an economic minister in the French Mitterrand administration, Attali’s economic insights here are fairly superficial.  That is to say there are occasional quotations and citations, but this is more or less a work of pure theory that spends no significant effort gathering sufficient empirical evidence to test the theory.  Moreover, this sort of historiography is naturally very selective, ending up quite obviously Euro-centric (the few token non-European references just confirm this bias).  The repeated metaphors and analogies to religious practice — “rituals” especially — are also not nearly as profound as Attali apparently thought them, though his meaning is clear enough that his chosen terminology is not crucial.  Despite a few minor errors (like quoting John Cage talking about “furniture music” when Cage was just paraphrasing Erik Satie), and a somewhat polemical tone, Attali offers many insights, mostly through his framework — though, sentence-for sentence, Bourdieu’s Distinction is packed with way more insights than Attali manages.

Attali still offers a lot of very appealing — if still empirically unsupported — assertions.  One great one is his claim that in the 20th Century (“repeating”), the success of particular music is dependent primarily (but not solely) upon it attracting marketing support to generate demand for it.  Doesn’t that just seem intuitively correct in the commercial context?  He also states the following little gems:

“To my way of thinking, music appears in myth as an affirmation that society is possible.  That is the essential thing.  Its order simulates the social order, and its dissonance express marginalities.”  (p. 29).

“Noise only produces order if it can concentrate a new sacrificial crisis at a singular point, in a catastrophe, in order to transcend the old violence and recreate a system of differences on another level of organization.  *** In other words, catastrophe is inscribed in order, just as crisis is inscribed in development.  There is no order that does not contain disorder within itself, and undoubtedly there is no disorder incapable of creating order.  This covers the dynamics of codes .  There remains the question of the succession of noises and orders, and their interferences.”  (p. 34).

With respect to the period of “repeating”, he also says:

“Music has thus become a strategic consumption, an essential mode of sociality for all those who feel themselves powerless before the monologue of the great  institutions.  It is also, therefore, an extremely effective exploration of the past, at a time when the present no longer answers to everyone’s needs.” (p. 100).

In a foreword to the English translation, Fredric Jameson emphasizes how Attali draws from the marxist notion of (economic) base and (cultural) superstructure, but makes a somewhat novel argument about music (in the superstructure) prophetically anticipating changes in the economic base — in this sense, Attali draws from Walter Benjamin, maoism, or perhaps even the way Frantz Fanon provided an explanation of how colonialism works and how it could be fought.  This is precisely the opposite of what Michael Denning‘s book Noise Uprising: The Audiopolitics of a World Musical Revolution does — and, for me, that was the weakest part of Denning’s book. Denning scrounges around to make his argument that the musical revolution of the early (pre-Depression) electrical microphone era was uniquely tied to the economies of global “port cities”. Denning there insists on the orthodox marxist position of the base determining the superstructure. Because he is wedded to that theoretical framework, it leads him to make some characterizations with pretty flimsy evidence — he never convinced me that port cities played any unique role, though his Noise Uprising book is still very interesting despite that limitation.

Bruits [Noise] is certainly an important statement, one that anyone contemplating the history and economics of music should grapple with in some form, in the same way as with Roland Barthes‘ Critique et vérité [Criticism and Truth].