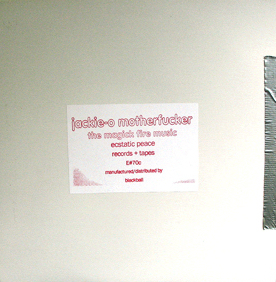 Much like Earth gained notoriety on Earth 2: Special Low Frequency Version (1993) playing heavy metal rock at a glacial pace, to the point that the same chords take on a different character, Jackie-O Motherfucker played long jams that vaguely resembled so-called post-rock acts of the preceding decade (Dirty Three, Gastr del Sol, Godspeed You! Black Emperor) but slowed down and with jazzier improvisational choices.  The opening song “Extension” is like “Blind Willie” from Sonny Sharrock‘s Guitar (1986), played at a snail’s pace, with an amiable, meandering progression like Sharrock’s “Portrait of Linda in Three Colors, All Black” from Black Woman (1969).  The slow tempos also give this album an atmospheric quality, not quite to the point of being ambient, “furniture” music, but to the point that the percussive and rhythmic qualities of the playing subside.  The band’s later recordings leaned further toward both folk music and juxtapositions of disparate genres.  The way this music takes its time to unfold is refreshing.  It is also cautiously optimistic.  Worth seeking out. 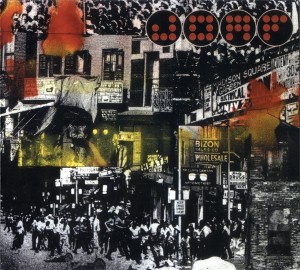 Jackie-O Motherfucker’s (JOMF’s) approach to music is syncretic. Percussive elements draw out and expand other sounds lurking in guitars and other noisemakers. The sounds are distantly familiar, but they now seem to slowly rise to a conscious level. Once a part of the music has made itself felt, JOMF move on. The progression is slow. It is also steady. JOMF pull together folk, ragas, turntablism, jazz, blues, rock. Actually, they do a good job summing up their many influences. They look upon those influences as raw material for new combinations and presentations.  This is a strange and friendly mélange of urban and rural elements.  Part of the so-called “free folk” movement, this is vaguely like psychedelic jam band music but far less prone to showiness and guitar wankery than that label suggests.

Change is a very good album. Part of what makes it so good is that each song elaborates its themes. Solos and impressive technical feats aren’t the attraction; the shifting, almost pastoral musical landscape is. This takes attention away from the individual band members. The album offers the chance experience the concepts through many perspectives. The result is big; you have to step back to take it all in. Change is an opportunity to consider where you are, in relation, then to ask if you are ready for whatever comes next. Because whatever music has in store tomorrow, it will have to be different. JOMF have covered a lot of territory, and for anyone to retrace any of their steps would be too boring. And deep under the guitars that sound like sitars, the mumbled vocals, and the saxophone that makes its humble appearances, JOMF have a positive outlook as to where things are headed. Attention: Now leaving the terrordome.