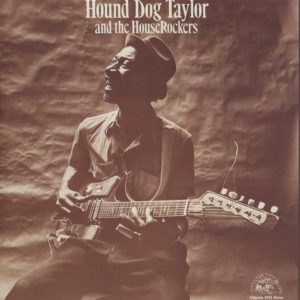 Here is a blues album that is nothing if not a good time.  Hound Dog Taylor played electric slide guitar (always on cheap guitars and amps) with a raw boogie-woogie feeling — he was highly influenced by Elmore James.  If you have heard streetside buskers playing solo guitar with a battery-powered amp carried on a rolling luggage cart, you probably have a sense of a second- or third-rate version of what Hound Dog sounded like.  He was born with six fingers on each hand, but cut one off as an adult (supposedly in a drunken stupor).  This album, the first for the now-revered Alligator Records, was hugely influential for “primitive” rock acts.  This isn’t music for obsessive (or simply lame) blues aficionados.  This is party music.  While Hound Dog plays standard blues chord progressions, he has a tendency to start riffs very high up on the neck of his guitar, then move down.  Despite being “blues”, that approach gives the music an relatively upbeat quality.  Considering that all the songs are lively and mid- or up-tempo also helps in that regard.  The songs may be about heartbreak and down-and-out circumstances, but Hound Dog delivers the lyrics with a kind of “roll with the punches” irreverence that suggests life is what you make it.  I once read a characterization of the writings of Andrei Platonov as being about finding utopia in what most would consider a dystopia.  Maybe that applies here too.