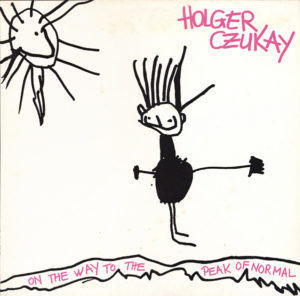 Before the advent of samplers and digital audio — with all the concomitant abilities to dice up and recombine sounds — Holger Czukay made On the Way to the Peak of Normal, a highly personal and fully analog set of sound musings.  Drawing on techniques from avant-garde modern classical (think Stockhausen‘s Hymnen, Steve Reich‘s “Come Out” and those sorts of things), plus the spliced-together rock music of his former “krautrock” band CAN, Czukay combines found sounds, bedroom/basement guitar/bass jams, comically unexpected instrumentation, and extended suite-like structures, to form an original and remarkably, infectiously durable album.

“To break up an idea into its ultimate elements means returning upon its moments, which at least do not have the form of the given idea when found, but are the immediate property of the self.  Doubtless this analysis only arrives at thoughts which are themselves familiar elements, fixed inert determinations.  But what is thus separated, and in a sense is unreal, is itself an essential moment; for just because the concrete fact is self-divided, and turns into unreality, it is something self-moving, self-active.  The action of separating the elements is the exercise of the force of Understanding, the most astonishing and greatest of all powers, or rather the absolute power.”  G.W.F. Hegel, Preface (para. 32) to The Phenomenology of Mind.

By sheer coincidence, I first encountered this album at the same time I discovered cLOUDDEAD‘s self-titled collection of 12″ records, and the two albums have a lot of similarities.  Czukay is less precious.  And that is fine.  When I first heard On the Way to the Peak of Normal I was particularly impressed with the way some of the sounds on it were “field recordings” made with a dictaphone — a technology now all but obsolete, but still pointedly in use when I heard this album!  I also really liked (and still do) the way a horn (french horn?) kind of bubbles up unexpectedly in “Ode to Perfume,” a song to that point made mostly with conventional rock instrumentation.  The pace is sometimes slow enough that you can almost hear the wheels turning to inch the magnetic tape along holding these sounds, but that only adds to the overall charm of the album.  This is a heart-warming winner.