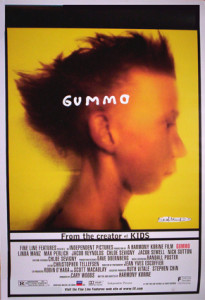 Harmony Korine is the heir to the likes of Pier Paolo Pasolini, making films that are about sociological premises.  So, Spring Breakers (2013) makes the most sense after reading Thorstein Veblen‘s book The Theory of the Leisure Class (1899), with its sardonic descriptions of how rituals of the elite (much like spring break for college students) presuppose the means to fund such activities — the poor have to steal (money) in order to acquire that social capital themselves.  There was a review of Gummo by Janet Maslin in the New York Times who wrote that no other film that year “will match the sourness, cynicism and pretension of Mr. Korine’s debut feature.”  But, to me at least, the film is the exact opposite of that, and it was New York Liberals like Maslin projecting their bigotries onto the film.  This is what I though was remarkable about Gummo: it forces liberals, etc. to reveal their elitist bigotry and tentatively reveal their oppressive tendencies.  Uwe Nettlebeck (producer of the early Faust albums) made a similar comment in the 1970s about the need to “force the other side to show its true colours; they won’t react in a liberal way as they would like, but in an authoritarian way as they must when things get serious”.

Gummo is most like Pasolini’s Accatone (1961) in taking unsympathetic characters and trying to humanize and find sympathy with them.  It is a difficult proposition.  Korine took 1990s daytime TV trashsploitation and tried to celebrate its inhabitants.  It’s fair to say he’s exploiting them too — its almost impossible to make a film without some kind of exploitation — but he’s also pushing against condescension, taking on what seems on the surface irredeemable.  He also embraces the weird as an end unto itself, as kind of non sequiturs of capitalism that create small pockets of escape.

Oh, and anyone wondering what the title “Gummo” refers to, that would be Gummo Marx, the vaudeville performer who quit his brothers’ troupe before they went into film.