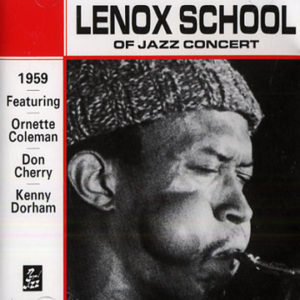 There are a few jazz concerts that changed the world.  The “October Revolution in Jazz” series is often cited as one of them.  But that concert series from 1964 wouldn’t have occurred without a particular concert at the end of the Lenox School of Jazz summer jazz workshop in 1959.  Run by John Lewis of The Modern Jazz Quartet, Ornette Coleman was brought in to an audience of East Coast (mostly New York City) jazz luminaries.  Ornette had the opportunity to present his music to the most influential performers in the jazz world.  It was this concert, more than any other factor (Cecil Taylor still being ignored and not finding gigs), that convinced the jazz world that something eventually called “free jazz” was a real possibility.

The first track is Ornette’s “The Sphinx.”  The melody is perhaps reminiscent of Henry Mancini, but without the irony or kitsch.  That was the thing about Ornette.  He could merge the simple and complex seamlessly, just as he could high and low culture.  There are a lot of good performances here, from many different performers, many of whom are stars in their own right (or at least notable underground/fringe figures, like composition student Margo Guryan), but it is most likely that listeners will come to this seeking to hear Ornette’s performance.  Bear in mind this is a mere selection from the concert; not all the performances have survived in recorded form.  For listeners most concerned with the earliest recorded performances of Ornette Coleman, note that there are earlier recordings, including Complete Live at the Hillcrest Club (recorded in 1958) and his studio albums for Contemporary Records.  But the reason his studio albums for Atlantic Records gained notoriety is because of these concert performances.