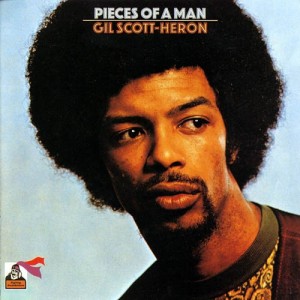 Fortunately Gil Scott-Heron never held back the power of his words. He was not afraid to knock you down right off with a left hook. His initial blow leaves you a bit vulnerable to his messages for which you would otherwise guard against. But these are defensive tactics meant to assuage the theft of his humanity. He brings you in to a place rough seas have yet to engulf.

Gil Scott-Heron talks about redemption but not in simple assumptions. He deeply reasons it through, complete with all the unpleasant but unavoidable consequences. Drug abuse told through the eyes of an addict, revolution as hard work.

This album was the beginning of a long collaboration with Brian Jackson. The great Ron Carter also appears on bass, proving that great musicians can make great pop music or anything else they want. Together with producer Bob Thiele, these musicians reject perfectionism. This disc sounds like it came from the early 1970s, with a funky, jazzy backing an sing-speak raps over the top. It is worth the effort to hear this as more than a novelty from time capsule.  Gil had a wit that was sharp, incisive and generous.  He rarely gets his due as one of the great poets of rock and roll. This semi-autobiographical masterwork — it doesn’t have to be flawless to be that — isn’t the whole story. Pieces of a Man is Gil Scott-Heron’s gathering of the remains of what could have been.