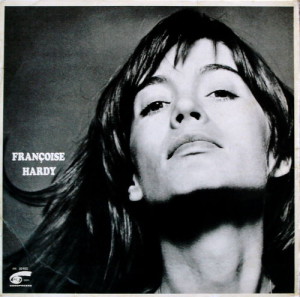 Françoise Hardy was one of the more literate pop/folk artists of her time in the 1960s and 70s.  La question, her best-known album, is very nearly a collaboration with Tuca (Valeniza Zagni da Silva), a Brazilian musician who wrote or co-wrote most of the songs, plays guitar and contributed to arrangements.  There are small South American accents on the guitar playing, even as the album is thoroughly French.  But Hardy still makes her mark with perfectly hushed, contemplative vocals.  The song lyrics are practically adolescent poetry, mostly about romance and existential crises — though “Le martien” is a tale about aliens reminiscent of Neil Young‘s “After the Gold Rush.”  This is music about trying to find a hold on something when it seems like everything is about to wash away.  The words to describe it: melancholy, wistful, wounded, lonely, searching, moody, bookish, romantic.  Although impeccably recorded with a tasteful chamber pop setting, this is also a strikingly spare recording, with Hardy’s voice and acoustic guitar the only constants.  The title song, co-written by Hardy and Tuca, ends with the line “Tu es ma question sans réponse, mon cri muet et mon silence.” (“You’re my question without an answer, my mute cry and my silence.”).  With the Sixties over, May 1968 already fading from memory, La question is sort of like a counterpart to what Scott Walker had done in prior years: a sophisticated twisting of popular song in an introverted fashion.  But unlike Walker, Hardy performs almost exclusively for private, intimate listening.