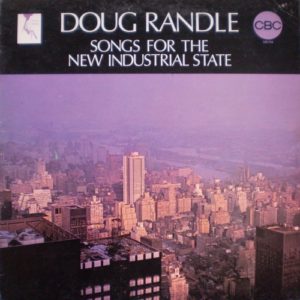 Doug Randle had been around the music business for quite some time before his Songs for the New Industrial State was recorded in Toronto in the early 1970s.  It is built on the type of Sunshine Pop vocals, horn section arrangements and harpsichord flourishes that would have been quite popular five years earlier.  But this isn’t exactly pure Sunshine Pop.  It has a rather bleak outlook that recalls the darker aspects of Carpenters albums of the period.  In a way, it’s much like the famous Nicholas Ray film Bigger Than Life in which a way of life just sort of cracks.  Randle wasn’t much of a lyricist.  His words (he doesn’t sing on the album) land with a thud as often as not.  Yet the contrast between the lyrics and the arrangements might be seen as a very early attempt at the ironic distancing that became commonplace in bourgeois indie pop a few decades out.