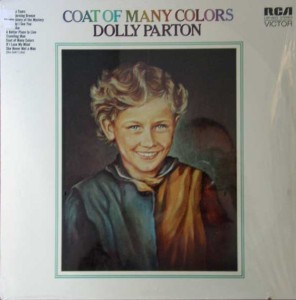 Dolly’s big breakthrough as a solo act was Coat of Many Colors, with the opening three songs each becoming hits.  However, the album as a whole, while often regarded as finding her at an artistic peak, is deeply contradicted.  Her former duet partner Porter Wagoner wrote three of the songs, and they are largely the worst things here, from the creepy swingers song “If I Lose My Mind” to the drab religious tune “The Mystery of the Mystery” they have no heart and simply scrape around for anything that will appeal to a target demographic.  The big surprise, though, is Dolly’s songwriting.  “My Blue Tears” and “Here I Am” are pretty compelling, with clear lineage to Nashville country music of old but also warm, modern electric instrumentation that slides gracefully into the then-burgeoning singer-songwriter movement on the U.S. West Coast. There aren’t any great surprises in the performances, but they all easily make use of the best contemporary trends with an open mind.

With the title track, it is worth contrasting Dolly to another big country star of the day: Loretta Lynn.  Lynn was a bold songwriter, who had a hit in 1970 with “Coal Miner’s Daughter,” an autobiographical song about growing up in Butcher Hollow, Kentucky.  Dolly’s song is about compensating for the shame and deprivation of poverty with family ties, while Lynn’s is more about the dignity of subsistence labor.  The perspective in Dolly’s song is of a clash of different value systems, one based on monetary wealth (that would buy a new, professionally made coat) and self-improvised utility (making a coat from rags, for lack of alternatives).  But while she sings about not understanding why others don’t recognize the “love” that went into making the homemade “coat of many colors,” there is a conceit in pleading for the listener to place what she had above what she lacked, by tacitly accepting the value system of the kids who laughed at the poverty her homemade clothing symbolized.  She sings, “One is only poor only if you choose to be,” the classic trope that everything in the world is purely a matter of individual choice rather than choice positioned in a context of constraints that might not be subject to an individual’s control.  Lynn’s song envisions something beyond a value system that denigrates the work of a Kentucky coal miner to support a family, and grapples with the concrete ways her family addressed the hardships of poverty.  “Coal Miner’s Daughter” looks back on the past, and finds meaning (truth) in what survived (in memories) and lead to where she ended up.  “Coat of Many Colors” likewise looks back on the past, but as a sentimental episode confined to the past.  Its only relationship to the present seems to that of a distancing effect, by placing deprivation in a bygone era that was somehow overcome (in ways never explained or implied by the song).  To put it more simply, Dolly’s song competes within a system that strives to place winners above losers and claims a victory in that terrain, while Lynn’s song calmly rebels against such a system by entertaining the possibility of every humble person living a good life on her own terms without distinguishing between winners and losers.  So, even from just the microcosm of these two songs, it is no surprise that Lynn’s persona was that of a feminist icon, with a sassy, “independent woman” demeanor that was at odds with the normally conservative politics behind commercial Nashville music of the day, while Dolly’s was that of a woman succeeding within the confines of a social structure that assigned her to a subordinate status by playing the “Backwoods Barbie Doll” role.  Dolly later starred in Hollywood movies, at most in roles in which her character seeks accommodation and satisfaction in unjust scenarios, while a “New Hollywood” movie based on Lynn’s life boldly had non-musician actresses sing — convincingly — songs associated with talented country stars.