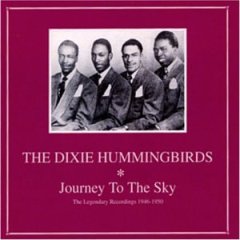 Legendary vocal quartet music, featuring dynamic lead singer Ira Tucker and bass vocalist William Bobo.  This may be the very best vocal group music of the late 1940s, at a point when the “jubilee” style of gospel singing was being left behind in favor of the new, more daring “hard gospel” style.  Too many classic cuts here to go through them all individually, but hearing just “Move On Up a Little Higher” (either version), “In the Storm Too Long”, or “Search Me Lord” alone would be enough to make the whole set worthwhile even though there isn’t a bad cut to be found.  You don’t need to have any interest in the religious content of this music to enjoy it.  This particular set lacks recording and release information (at least in english), but the sound is great for recordings this old.  There are a few other Dixie Hummingbird collections out there on CD as well, like Complete Recorded Works 1939-1947 in Chronological Order covering a generally earlier period, and Thank You for One More Day: The 70th Anniversary of The Dixie Hummingbirds and The Best of both focusing a bit more on later periods.  But this is probably the place to start.