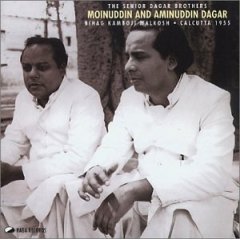 This release is flawed only in the manner of its recording.  As a live release, and an old one at that, there are some background noises audible and one of the brothers coughs repeatedly during the performance.  “Raga Malkosh” is only heard for the first 25 minutes, and apparently the rest of the performance was not recorded.  Fortunately, those things are only occasional annoyances and shouldn’t keep anyone away from this music.  The performance itself is fantastic.  I can’t tell the two brothers (Aminuddin Khan Dagar and Moinuddin Khan Dagar) apart on this record, but I’ve heard people comment that they trade off vocals in different pitch ranges so as to extend their collective range.  These are morning ragas, so for best effect they should be heard in the morning.  Fans of this should be sure to check out Pandit Pran Nath too.