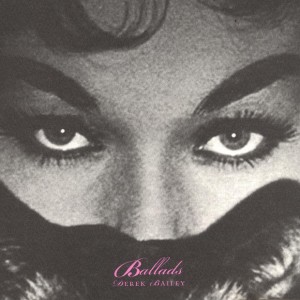 Derek Bailey is a master of creating sound from a guitar. For him to do an album of ballads might seem like a waste of talent. But is it such a waste? Ballads is an amazing album. It’s one that belongs with the most important work of the most important artists. This isn’t just a success for Derek Bailey but a grand achievement of the highest order.

To begin with, Bailey can set hearts aflutter with only the briefest use of melodies. He moves quite deftly between furious free improvisation and flowing chord progressions.

Quite simply, Bailey makes more of the ballads he plays. None are reduced or trivialized. The ballads don’t hinder Bailey’s improvisation. They are part of an evolving music placing no more relative value on any particular forms. What we have is a total recreation of how structure fits into a program of improvisation. It is fair to say this was no easy task. Ballads come with certain inherent limits. Certain rhythms and certain tempos can overpower a ballad. Percussive qualities too are generally hindered by the delicate melodies and narrow harmonic flexibility of a ballad. Of course, these used to be the inherent limits of ballads. There are limits no more.

Ballads simply has me beguiled, enchanted. There are three Hoagy Carmichael songs, not to mention “Stella By Starlight,” “Body and Soul” and two renditions each of “Gone With the Wind” and “Rockin’ Chair.” In a cunning little way, “Please Don’t Talk About Me When I’m Gone” concludes the disc. Hearing the whole disc, I feel like nothing was taken from me, everything given to me. The timeless nature resounds with each pluck and bang on Bailey’s guitar. When his strings resonate, so too does the shapeless possibility of playing ballads without limits. Hearing limitless music like this is most definitely a captivating experience.

Bailey says, “It was Zorn’s idea.” John Zorn and his Tzadik record label deserve much credit then. Ballads isn’t the kind of record you would expect Bailey to make. That perhaps is a large measure of what makes it such a success. Making a record unlike his others tends to eliminate an easy consistency with what he knows of himself. Ironically, Bailey takes a huge risk by entering familiar ground. He opens himself up to all kinds of judgments when he adds a reference point playing a standard. Preserving his natural freedom amidst the structures of these ballads requires some choice of what he himself can do while still advancing the overall structure. If this approach makes Bailey guilty of violating the rules of both balladeering and free improv, then he is a great criminal. We need that kind of spirit.