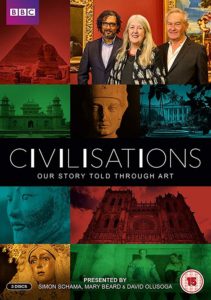 The BBC produced an art history mini-series entitled Civilisations that reprised a series called Civilisation: A Personal View by Kenneth Clarke from decades earlier.  The series title was spelled Civilizations for its modified version aired on PBS in the USA, in which different narration is used and possibly other changes were made.  This review focuses on the version aired in the USA.

Viewers may gain much from watching the Mary Beard episodes but skipping the Schama and Olusoga ones and substituting, say, Sister Wendy’s Story of Painting (1996).  Yes, a show hosted by a nun is less dogmatic and less biased than those by Schama and Olusoga!  Another good supplement would perhaps be Ways of Seeing.  Also, the original series by Kenneth Clarke is worth seeing, for the most part.  Despite being exclusively focused on European art history, and despite Clarke’s off-putting neo-feudal advocacy and recurring anti-communist diatribes, he at least openly called himself in the series a “stick-in-the-mud” advocating outtdated political ideas, which is something that Schama and Olusoga are shamefully unwilling to do in this later series.