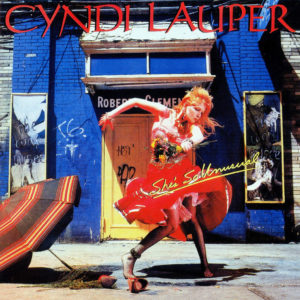 Occasionally, mainstream pop/rock albums succeed.  The odds are against them, but Cyndi Lauper’s She’s So Unusual beats the odds to succeed.  This is really a great summary of a lot of things happening in pop and rock music at the beginning of the 1980s.  There are, of course, the huge hits “Girls Just Want to Have Fun” and “Time After Time.”  But most of side one of the LP is great.  There is a cover of Prince‘s “When You Were Mine” that is filler.  Yet if you must have filler, why not a good Prince song?  The opener “Money Changes Everything” is one of the album’s best, with somewhat of a Springsteen flavor and featuring a melodica solo in the style of The The.  Side two is even more eclectic.  “All Through the Night” was a minor hit (also somewhat in the style of The The).  It is followed by a second-wave ska number “Witness,” then a new wave rocker similar to “She Bop” from side one.  There is a skit, “He’s So Unusual,” that kind of references Betty Boop.  The album wraps up with “Yeah Yeah,” a zany rock song with synth horns and punchy keyboards, done in the style of Oingo Boingo and carrying over the Betty Boop vocal affectations from the skit.  So, everything here has clear precedents and influences, worn on its sleeve.  She’s So Unusual works partly because Lauper is actually a great singer, with a heavy New York accent but also ample range.  The other secret to the album’s success is how convincingly each of the styles is reproduced.  There isn’t a misstep to be found anywhere.  Even decades later this album is a blast and hasn’t hardly aged.  This album was a huge commercial success, as was the follow-up True Colors, though Lauper was less of a commercial force in later years.  Yet she evolved.  Just a few weeks after the 9/11 attacks in 2001, she appeared on a John Lennon tribute show “Come Together: A Night for John Lennon’s Words and Music” performing “Strawberry Fields Forever” in Central Park.  It was probably the most impressive performance on the program, and a good example of how Lauper stayed relevant beyond being just a camp icon.