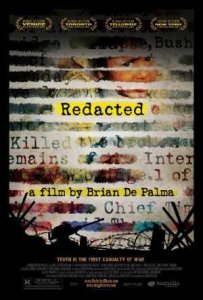 Although director Brian De Palma won accolades in early European film festivals, Redacted was a commercial failure in the United States.  It opened in barely more than a dozen theaters and hardly anyone saw it.  That might be explained — in the post-Jaws manner of direct marketing — that the film wasn’t advertised enough.  Regardless, it remains a difficult film to watch, but is still among the more significant made thus far about the U.S. invasion and occupation of Iraq.

The film does not devote itself to the reasons for the invasion and occupation, or the political motives for doing so.  Rather, it takes aim at the withholding of the “facts” about what actually was happening during the occupation.  As the film’s title implies, this is partly about the U.S. government covering-up and concealing what was happening, but perhaps more so the role of the media in enabling a deception on the American people who ostensibly enable the war and occupation.  The story is fictional, but was based on real events involving the rape and murder of an Iraqi civilian by U.S. troops.

What has attracted the most attention is the technique of interspersing different perspectives.  The film is presented as if assembled from a video diary by the soldiers themselves, footage from French and Arabic television crews, security cameras, as well as Internet videos.  The notion of presenting multiple perspectives goes back to films like Rashomon (1950), though the extensive use of first-person video recalls the zombie movie Diary of the Dead (2007), which was released a mere week later.  Like that zombie movie, the acting in Redacted has some weak spots, exacerbated by poor casting.

The central plot of the film involves a couple of clearly mentally disturbed soldiers who decide to rape a local girl who passes through their military checkpoint daily.  Although they inform other soldiers in their unit, those others do little or nothing to stop them.  In this way, De Palma frames the plot around something close to Hannah Arendt‘s famous notion about the “banality of evil”, developed when she wrote about the Nazi concentration camp administrator Adolph Eichmann (Eichmann in Jerusalem: A Report on the Banality of Evil).  In a historical sense, the rape incident in Redacted resembles the My Lai Massacre from the Vietnam War, a story broken after the fact by independent investigative journalist Seymour Hersh.  Following the rape, one of the soldiers, who was making the video diary throughout the movie, is kidnapped by insurgents and beheaded on camera, as revenge for the rape and murder (though it is unclear if these insurgents knew that the kidnapped soldier was directly involved).  The highest ranking soldier of the unit reports the incident, at which point his account is suppressed and distorted — this is where the “redaction” by the government occurs.

The film’s harshest judgment seems reserved for the solider making the video diary, who goes along with the others who commit the rape and murders (the girl’s family is also killed) to document the event like a journalist.  Journalists often espouse an “ethics” of non-involvement, in which they act as passive observers and do not act affirmatively to assist their subjects.  De Palma is puts that position up for debate.  The other perspective is that maybe journalists act as collaborators and enablers.  This other point of view has long been espoused outside of mainstream journalism.  Noam Chomsky and Edward S. Herman’s book Manufacturing Consent: The Political Economy of the Mass Media is perhaps the most well-known formulation..

De Palma’s film was a failure, in the sense that it did not raise awareness of the issues it presents.  And yet, history has absolutely vindicated the film’s perspective.  The Wikileaks organization released a trove of documents about the Iraq war and occupation that contradicted official claims and denials, most famously the “Collateral Murder” video, with an extensive campaign against the leaker Chelsea (Bradley) Manning and the operator of Wikileaks, Julian Assange.  As this review is being written, hired mercenaries who worked in Iraq were just convicted for the Nissour Square Massacre.  Another recent story showed that weapons of mass destruction (WMDs) were found in Iraq, but they were old ones leftover from the war with Iran in the 1980s, and had been made with U.S. assistance.  With this information in hand, De Palma’s film looks like a chillingly accurate portrayal of what can be expected to happen in a military occupation, and how those at the bottom deal with those realities.  This film deserves much credit for extending its moral concern not just to U.S. soldiers but also to the locals subject to the U.S. military’s use of force.