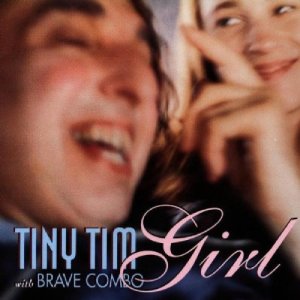 Well, this album has finally given me the idea of the proper time to yell out, “Play ‘Stairway to Heaven!'”  Dinner theater.  I have one Robert Goulet album, a live one, and he takes the time between songs to mention that the next number is one he sang on Broadway, and how he’s going to do a song that’s about love, and he somehow conveys — on vinyl — the way he’s leaning down to suggestively hold the hand of some swooning woman in the audience.  Tiny Tim plays “Stairway” the way Goulet would have, but that’s not enough, so there is a vocal chorus reminiscent of The 5th Dimension‘s “Age of Aquarius” for good measure.  Oh, then Tiny Tim does a cha-cha-cha version of “Hey Jude” and you wonder why you didn’t sing it that way along with the similar pre-programmed beat from your late 1980s Casio synthesizer.  Tiny Tim’s voice isn’t the ridiculous falsetto you remember, but deepened to something more like Bobby “Boris” Pickett of “Monster Mash” fame, with a lot more fantastically odd vibrato.  He’s swooping from rock era hits to forgotten vaudeville numbers to old show tunes, and more.  Tiny Tim could be kidding and completely serious at the same time.  Yes, god bless Tiny Tim. Head for a Neil Hamburger record next.