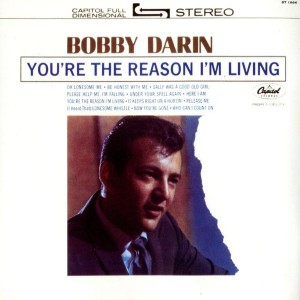 You’re the Reason I’m Living has Bobby Darin crooning over pop country treatments, something experiencing a cross-over surge since the prior year thanks to Ray Charles — people from the traditional pop world like Dean Martin, Steve Lawrence, Eydie Gormé, and Darin were trying to capitalize on the fad.  Darin had already released one country single (“Things”).  Much of the time, a mid- to late-career country recording is a condescending effort to reach out to the rural slums when fickle tastes of urban elites start to pass by a once mighty star, or some equally lame reason (just a few later examples: Nashville Skyline, We Had It All, Almost Blue, Hanky Panky, Honeycomb, …).  Of course, Darin sings nicely.  He always did.  But the music behind him, especially on side two, is no more than an extremely lazy amalgamation of cliches and stereotypes.  The horn charts are all homophonic blasts of energy, without any sort of modulation, or for that matter any real purpose specific to these songs.  The strings seem to offer only one texture, pointlessly tacked on to a number of songs in a way that smacks of pure happenstance.  The vocal chorus backing (“You’re the Reason I’m Living,” “Release Me,” “Here I Am,” “Please Help Me, I’m Falling”) is also that over-used male/female mashup of Gregorian chants and barbershop quartets that soiled recordings a-plenty for many years after WWII.  On the plus side, the Hank Williams song “(I Heard That) Lonesome Whistle” is not the bleak loner tune it usually is, but an original Icarus-like reading that portrays a dumbfounded big shot tumbling from great heights.  “It Keeps Right A-Hurtin'” has a nice soulful country walk that lets Darin sing with as much longing as possible.  There is some decent pedal steel guitar (“Now You’re Gone”), and honky tonk piano (“Be Honest With Me”) too.  Elsewhere he’s stuck awkwardly between the terrain of a country-tinged, clean-cut heartthrob like Ricky Nelson and a Vegas-style approximation of “Country & Western” music that a showtune star like Debbie Reynolds might have tried.  What really drags, though, is the way Darin starts to sing every song the same way.  After almost every line, he finishes the last word with the same brooding, sly melisma, stretching and bending the last syllable of each line for heavy-handed emphasis.  This is felt most strongly on “Who Can I Count on.”  The effect seems like a profoundly calculated and circumscribed attempt to add hints of polite, socially acceptable swagger and palpable, seductive charisma.  Unfortunately, though, it comes across at best as an overused affectation and at worst as a crippling limitation on his stylistic range. All that aside, the biggest problem with this album is that it never presents a convincing case for adding glitzy pop orchestration to country songs.  It would seem that the producers thought that was what Darin fans expected, even when he was doing a country album, so they are added in without any further deliberation.  That rationale, inasmuch as it was consciously or unconsciously used, is specious.  Darin, himself, is sort of exactly what he sets out to be: someone who doesn’t respect rigid genre boundaries.  That ends up being kind of cool and kind of creepy, actually.  His near obsession with awkward, unexpected twists and stylistic combinations is creepy!  Anyway, Darin was an interesting character, though much of what he did was sort of a journeyman version of Scott Walker‘s career.