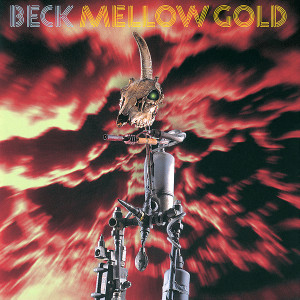 I can see why people love this, and love Beck.  But I don’t love this album.  From my first listen I found it mediocre, and 20 years on it doesn’t particularly impress me.  There are two good songs: “Loser” and “Beercan”.  In fact, “Loser” is great.  The rest?  Well, you can certainly look at this as an achievement in eclecticism.  Immediately following the rock/hip-hop hybrid that is the opener “Loser,” Beck turns to a sort of rudimentary Bob Dylan parody in “Pay No Mind (Snoozer)”.  Elsewhere, he’s channeling The Beastie Boys.  And he hits other points in between.  The eclecticism is sort of amusing.  But Beck isn’t a very strong lyricist at this stage.  But that isn’t why this album was popular.  Aside from the hit “Loser,” this manages to make good use of the studio to make weak songs sound a hell of a lot more interesting than they should.  But also this album was something of a signifier of a larger trend when the “big boys” at major labels were willing to acknowledge and promote music that was a lot more juvenile than what they normally promoted.  Make no mistake, Beck was quite juvenile in ’94.  This was the same era that produced movies like Clerks (1994), catering to kinda immature teenagers who didn’t usually see a whole lot of widely available (read: non-underground) entertainment directed toward them.  Beck was able to ride that wave, and he is sort of a poster child for that phenomenon of the “alternative rock” era, the dopier, funnier counterpart to the serious “artiste” figures like Kurt Cobain of Nirvana. 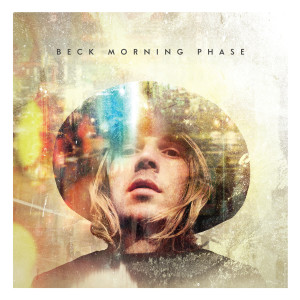 Beck returns to mellow indie-rock with Morning Phase.  It is territory he’s strode before.  But it also represents Beck the conformist, and the guy who seems to be a little long in the tooth for the rock and roll game.  Still, he’s also somewhat self-consciously taking on that role.

Once upon a time, fifteen years or so earlier, Beck worked in post-modern pastiche.  His music back then didn’t settle into one genre.  It drew from many.  It juxtaposed elements of each.  At a most elemental level, it presented a unique perspective on how to subjectivize the American experience of the 1990s.  It valued the diversity of expression available, and the permissiveness of access to those different forms.  It was the beginning of the Internet era, when communications were seeing a unprecedented (if, in hindsight, possibly brief) period of democratization, at least down through the middle class.  In music this meant that obscurantist knowledge was becoming less constrained into cliques organized around particular music shops, (maga)zines, concert venues, and so forth.  Cultural acuity began to require a faculty of recombining the large-scale raw elements of form.  This is what mattered at a time when information about music, and music itself (via on-line file-sharing services like Napster, etc.), was becoming more widely available.  There was more stuff out there, more readily available, than most people had historically been able to grasp.  And the music industry had just offered one of its more open-minded policies to mildly subversive material that would appeal to upper middle-class audiences (not just to lower middle and working class audiences).  There was a lot of music out there to choose from.  It mattered to audiences how a person would make sense of it all.  Enter Beck.  He took all these things floating around and pulled them together in a way that was fun, ironically mocking, and inclusive.  He pulled in elements of genres, like hip-hop, in which he possessed no inherent credibility.  He didn’t have the sort of “street cred” that seemed like a entry requirement for the “gangsta rap” that had dominated the hip-hop genre in the early part of the decade.  But he, and his producers, demonstrated that enough wit and some catchy hooks could totally obviate the need for entry credentials.

There was an audience out there who also liked a wide variety of types of music, and perhaps were demonstrating a possession of knowledge of such musics (“cultural capital”) by gravitating toward music that embodied diverse tastes.  Wrapped up in all this, still, was a certain irreverence.  There was no loyalty to any particular type or types music.  But this irreverence crafted another kind of loyalty within the specific audience that could understand a wide variety forms. Listeners toiling away at three jobs to make ends meet maybe did not have the time to absorb and contextualize multiple contemporary musical genres, not to mention have meaningful access to them.  Anyway, this positioned Beck’s relation to “genre” as a means of classifying music as something that principally depended on the audience’s sociological makeup, not the purely technical aspects of the sound in his music.

In the next decade, Beck turned to more discrete efforts in particular genres.  He gravitated toward themes like relationships, and his earlier focus on form sort of evaporated.  His music remained popular.  He was sort of a reliable figure, leaning on slightly different approaches, from moody, low key and nearly acoustic music, to brash guitar-rock with tinges of hip-hop and electronics.  Of course all of the kinds of music he was pursuing had precedents.  In fact it could almost be said that he was simply amplifying the dominant trends in the sort of rock that appealed to college-educated, white audiences — ones that always seems to have disposable income for music.  A clear pattern can be found in which he kind of followed more or less the same audience as it grew older and settled into more of a routine, which did not admit so much time for exploration of new and different musical genres.  This was reflected in Beck’s music more frequently being called “mature” than “juvenile”.

If Beck’s career can be compared to that of a figure from the world of cinema, François Truffaut would be as good a reference point as any.  Truffaut began as a film critic, but when he transitioned to the role a of director his earliest films exploded with personal idiosyncrasies made the thematic focal point.  But over time Truffaut chose commercial and financial well-being over artistic innovation.  Personal idiosyncrasies evaporated, and he made “films of quality” of the sort he once questioned as a film critic.  There was a shift from modernism to classicism.  Is this what has become of Beck?  The albums Beck now makes fit squarely into established genres.  He doesn’t really offer any particularly new ways of perceiving and subjectivizing worldly experience.  He instead has focused on craft and technique within well-defined genre boundaries.  He can do melancholy ballads.  He can handle three-chord guitar rock with distortion pedals.  If listeners choose to compare Beck’s music to that of other artists, there is nothing in the substantive content that can’t be readily found elsewhere.  But in terms of the packaging, so to speak, fairly little other recorded rock music has a more polished a delivery.  This stuff is well-built.  Not a note seems out of place.  He has access to absolutely the finest recording studios and supporting staff, and he makes ample use of those resources.  And also, there isn’t any filler material padding out the run-time of the albums.  Every song is finely honed, and effort went into each of them.

Beck can still write a decent song.  He also is not a bad singer.  But his attentions here are are on using established methods in a richer, more intricate web that relies less on discrete riffs and hooks than on slowly building modulations that evoke “evolution” of the music.  “Blue Moon” is an example of how effectively he can wield these sorts of techniques.  There are layered vocals set against a tapestry of acoustic guitar and distant sounding drums, with punctuation provided by piano.  The rhythm becomes more insistent.  Backing vocals grow more urgent while the drums sound more hurried.  The lyrics speak of a fear of abandonment and loneliness.  Really, they speak of concern for being left behind and forgotten.  These are relevant fears for an artist who has already achieved as much as can be expected as an entertainer, and is always at risk of becoming a forgotten anachronism.  Yet the music is so effusively smooth that it sort of drifts by rather than imposing itself.  It is almost a dare precisely to forget it.  That sort of seems to be the point.  Beck is playing the part of the fading middle-aged rocker, coming to terms with middle age.

On songs like “Wave” there is orchestral treatment, with rising and falling dramatic pulses (reminiscent of the only internationally known Icelandic pop singer). A moody darkness dominates.  “Don’t Let It Go” opens with deliberate acoustic guitar picking, emphasizing a rhythm that Beck’s vocals later emphasize.  A piano is added, followed by drums.  These are all well-established approaches for building moods in pop music.  So, maybe Beck is still combining different types of music?  There are bits and pieces of this music that resembles everything from 1970s FM radio pop rock to more contemporary “indie” rock.  This is more like a scavenger hunt.  It is like a challenge to find the points of reference, at once meant to be reassuring by making the referents very familiar to Beck’s core audience but also stretching to cover a wide assortment of middle-class mainstream pop.  This is something of a trend in indie rock of late, with a set of “musical anthropologists” of sorts trying to reclaim the passe pop music of prior generations.  Unfortunately, there is a self-congratulatory aspect to such devices in Beck’s hands, particularly when he draws from material that his audience probably already likes rather than challenging them to accept music they are socially expected to despise.

Beck is always ready to try to put a finger on what audiences want.  It almost seems like he’s reading up on market research, and delivering just what commercial rock needs in any given year — much like a certain Irish rock band that won’t be named.  But Morning Phase is ultimately a mediocre album because it doesn’t offer the realization of any new desires.  It is an attempt to capitalize on existing desire.  The calculated nature makes it inhibited.  No, there is nothing wrong with this music, exactly.  But it is no more than an attempt to fulfill the pre-existing expectations of an established audience.  No amount of coloration with gongs, mandolin, guitar flange pedals, pedal steel guitar, or airy vocals on the usual assortment of interpersonal relationship quandaries and weighty personal feelings can make it anything other than a palliative, an assurance to the audience that everything is as it should be.  The audience is left right where it began, mildly distracted by an unbroken chain of emotional distractions that just loop onto themselves across a host of musical genres.  If you are in the right demographic, the loop sounds vaguely like Beck, inasmuch as it sounds like anything distinct at all. 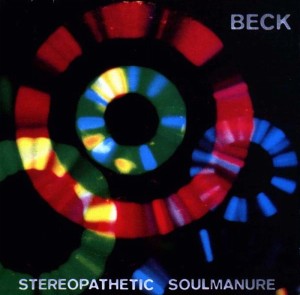 Some bag on Stereopathetic Soulmanure as an inferior Beck release, but I think it’s easily one of his best albums.  It’s a little rough in patches, but the eclectic songwriting is usually good and there is even some fairly good guitar playing.  Beck is all over the place.  From found sounds, to noise rock, to country, to folk, he tries a little of everything.  But he manages to pull it off.  In fact, Mellow Gold was a big step down from the creativity on display here.  Beck hadn’t yet hooked up with hip-hop producers but it’s no real loss with what is found here.  Is this juvenile?  Yes, of course.  But it manages to faithfully capture the sense of looking for something that resonates and finding the process of the search at least as interesting as anything found along the way.  This has the feel of bored Southern California kids making their own entertainment — not unlike what Ariel Pink would do a few years later.